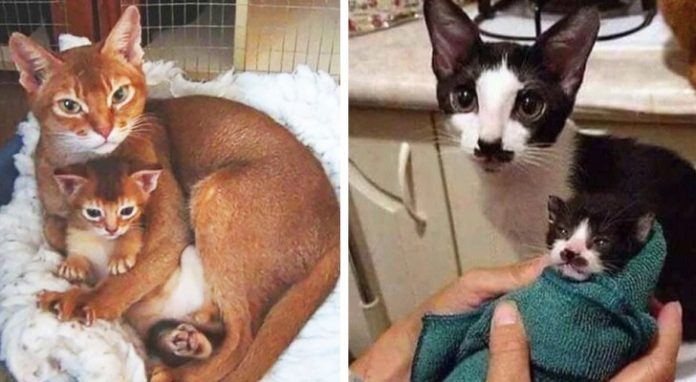 Did you know? A cat can be pregnant by different males, so kittens from the same litter can have multiple sires. That’s why you can never know what kittens will look like, and you can also expect big surprises – like black kittens from a white cat and vice versa!

In a home environment, however, the offspring are much more likely to be all from the same father, unless the cat has free access to outdoor environments. Sometimes the resemblance is so obvious that there is no longer any room for doubt. Here is a series of kittens that are identical to their parents.

#2. Father and son: if the color of the hair was not the same, it is their affection that eliminates any doubt about the degree of kinship.

#3. Have you noticed ? Same thicker black band under the neck, then darker lines of less thickness.

#4. Mom and puppy have the same thin muzzle.

#5. The white “beard” is passed down from generation to generation.

#6. This newborn kitten has the same spot on her nose as her mom.

#8. The distribution of the peas on the back of the little one is very similar to that of the mother.

#9. It is difficult to say that they are not mother and son: the elegance is the same!

#10. A small white dot on the nose to show the mother-son bond.

#11. The kitten has yet to work on her pouting expression, but she is well on her way to looking like mom!

#12. The mom and the little ones all have a colored ear compared to the rest of the body.

#14. Virtually indistinguishable: how do their masters recognize them?

#15. This kitten has a lot to learn from his father with his gruff appearance!

#16. Dad teaches his little one how to look innocent after doing something stupid.

These cats certainly don’t need DNA testing – the resemblance speaks for itself!