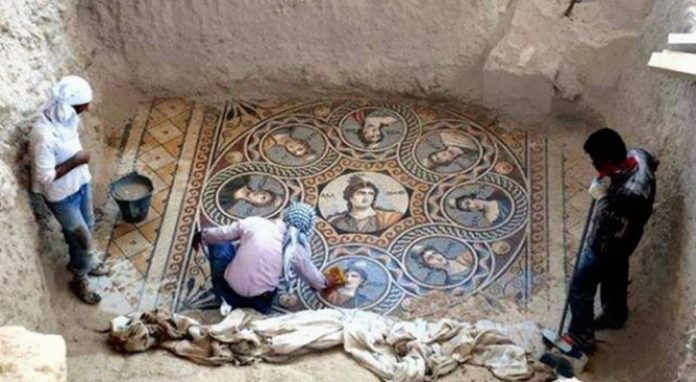 The excavations, which began in 2007, were accelerated by flooding in the area due to the construction of a dam. Fearing that the city’s ancient treasures would be lost forever, archaeologists rushed to dig, protect and preserve remnants of the past, including the splendid intact mosaics dating from the 2nd century BC. J.-C.

Although now part of the city is under water, excavations continue in the hope of uncovering more treasures.

According to Görkay, mosaics were an integral part of dwellings. Representing mythological figures, deities and ancient heroes, they were installed in the rooms so that guests could admire them while chatting and drinking with the owner of the house.

The subjects were carefully chosen according to the function of the room; for example, in the room, dominated a mosaic representing the lovers Eros and telete.

Also, the mosaics reflect the home owner’s tastes and interests.

“They were a figment of the master’s imagination. They weren’t just chosen from a catalog, they had the specific function of giving a good impression to the guests,” says Görkay.

Founded in 300 BC by Seleucus Nicator, one of Alexander the Great’s generals, the city was conquered by the Romans and renamed “Zeugma,” which in Greek means “union.”

Zeugma, thanks to its geographical location which facilitated commercial traffic, was one of the most important and wealthy centers of the eastern part of the Roman Empire and the mosaics demonstrate this.

(Poseidon, god of the sea, in his chariot, with the trident in his hand)

For over a thousand years, the cultural grandeur of the city was forgotten, until it was brought back to life by these recent excavations.

(Thalia, the muse of poetry and comedy)