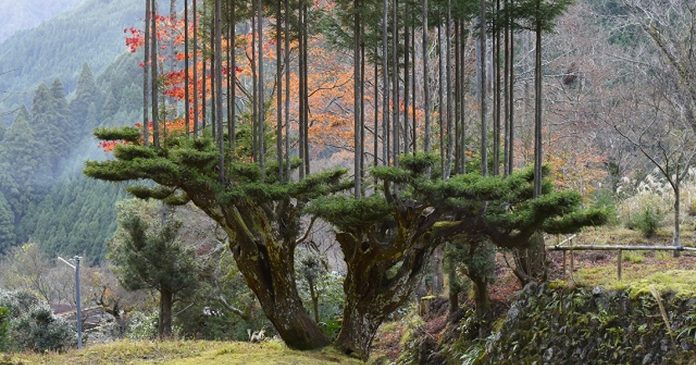 Sometime in 15th-century Japan, a horticultural technique called Daisugi was developed in Kyoto . Written as 台杉 and literally meaning “shelf cedar,” the technique resulted in a tree that resembled an open palm with several trees growing perfectly vertical. The photo below is a daisugi in the Kitayama district of Kyoto and is perhaps the most famous example in all of Japan.

The technique was developed in Kyoto as a means of solving plant shortages and was used to create a sustainable harvest of wood from a single tree. If done correctly, the technique can prevent deforestation and result in perfectly round and straight wood known as taruki , which is used in the roofs of Japanese teahouses. Smaller decorative daisugi also exist in Japan, but maintaining them can be expensive and time consuming. Below, Komori Zouen gardeners show before-and-after images illustrating the technique.

Before we talk about the daisugi , we must first talk about the original tree. Sugi means “cedar” in Japanese, and as we all know, cedar trees produce especially long and straight wood . However, the cedars grown in Kitayama are different elsewhere.

In Kitayama , the trees are cultivated in such a way that they grow very tall, straight, yet they will remain slender. The people of the area call the wood produced by the long, tall and slender trunk-like sugi trees “Kitayama Maruta” . Traditionally these logs are used for the main pillar of the Tokonoma alcove .

The Tokonoma alcove is a small space in traditional Japanese houses that is especially used to display aesthetic things. Things to display can range from seasonal scrolls, flower arrangements or also called ikebana, and any other art object.

Kitayama Maruta ‘s straight and slim feature is preferred because it suits the Tokonoma alcove design . It doesn’t block guests’ view of what’s on display, but it’s strong enough to be the mainstay of the alcove.

Kitayama Maruta itself is the only wood that meets the specific demands of the tea master Sen-no-rikyu , who is considered to have perfected the Cha-no-yu or tea-drinking culture in Japan. For this reason, Kitayama cedars are highly valued in the country.

The technique is called daisugi , it originated from the word “dai” which means table. Daisugi literally means “table cedar,” because this ancient bonsai technique makes the tree look like we’re putting something on a table made of cedar. In fact, the “table” is the cedar, but what is placed on it is also the cedar. How?

In daisugi , the cedar is heavily pruned in a special way that forms a giant bonsai that produces shoots of straight, upward-growing cedar branches. To ordinary people, the result will seem like we are growing cedars into smaller cedars.

This technique will allow the branches to be harvested every 20 years, shorter than normal sugi plants. What makes it amazing, a base daisugi can grow up to a hundred buds at a time, which means we can get more Kitayama Maruta from a single daisugi .

Although the Kitayama Maruta produced by daisugi is usually smaller, but it has different characteristics compared to normal sugi trees. The wood is 140% more flexible than regular Kitayama Maruta , while being twice as strong and dense.

With daisugi , we can get enough wood to produce all of those things without the need to cut down trees. From time to time we can get wood from the branches of those giant bonsai. And although the Kitayama foresters only focus on growing cedars, we may use the technique with other plants.

This ancient method has shown that it could provide enough wood to build noble samurai houses back then.

Why do you think we can’t also use it to provide us with enough woods for all our needs in the future? Leave us your comments!