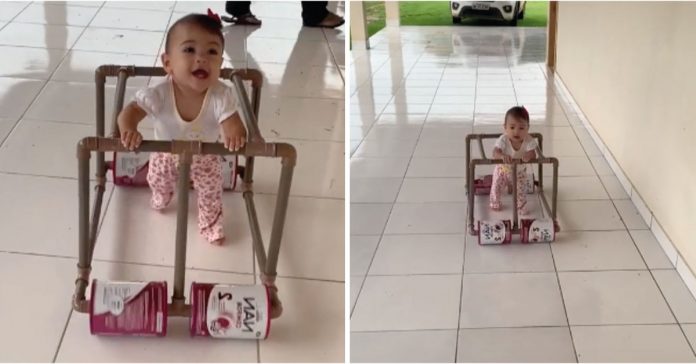 Social media users applauded her creativity and her ability to create something for her daughter.

Fathers and mothers will always be in the front row when it comes to supporting and caring for their children. Many stay awake and sacrifice hours working to be able to give their children everything they need, no matter what. However, not all families have the same opportunities, many live from day to day and have to make great sacrifices to seek stability, these same circumstances bring out the most creative side of their members. Of course, love and affection will never be lacking.

Today we bring you the case of a father who went viral on TikTok after showing the gift he gave his daughter. The video shows a baby walker made from PVC pipes and milk cans instead of wheels.

According to the information given by SDP Noticias , Mayrla Faria, a TikTok user and alleged mother of the baby, uploaded the video where we could see the little girl walking with her homemade walker.

Made with only PVC pipes and a few milk jugs, this creation could be possible. These types of baby instruments on the market are very expensive and unfortunately the family did not have the financial capacity to buy one for her.

However, the little girl’s father wanted to make her happy, so he decided to get down to work and make her his own homemade baby walker.

In the video we can see that the father of the little girl, named Ana, was very talented, since the girl can move without any difficulty around the patio of her house.

The video did not take long to go viral and hundreds of users congratulated the father for his creativity, skill and talent to create this craft.

The most important thing is that now Ana will be able to learn to walk without any problem and without her family having to spend a significant amount of money.