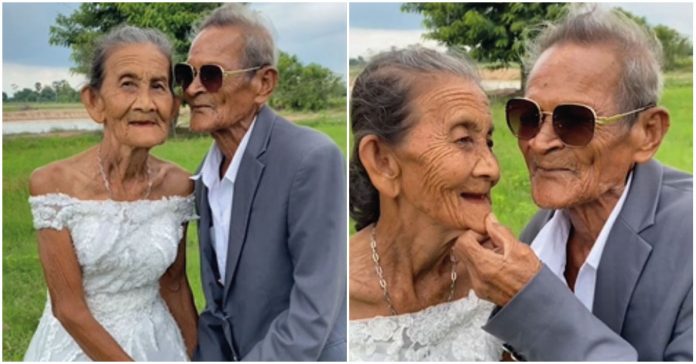 They were married in 1957 but they had no photographic recollection of their union, when their grandson found out he wanted to give them a gift.

86-year-old Wong Aou- Aurun and his 85-year-old wife Klin star in this heartwarming story. This pair of grandparents living in Thailand were able to recreate their wedding day and pose for the photos they had never had from that day.

The couple has been married for more than 65 years, that is, they have been together since 1957, but they never had photos to preserve that moment.

Since the 1950s they have lived happily in a small province in central Thailand, but their grandson Ittipol was upset to discover that his grandparents never had a photo album of their special day.

So his 37-year-old grandson wanted to surprise them. He arranged a full photo shoot for the happy couple in the fields near their home, renting a suit and wedding dress to make it all the more special.

Seeing the images, and the small video that Ittipol uploaded to his TikTok, we can see that the couple looks very happy posing in the middle of the field, recreating the day of their marriage but with all the experiences they have had as a couple.

“I HAVE BEEN WORKING AS A WEDDING PHOTOGRAPHER, BUT I FELT BAD BECAUSE MY OWN GRANDPARENTS DIDN’T EVEN HAVE THEIR PICTURES. I GAVE THEM A SURPRISE SESSION WITH THE HELP OF SOME FRIENDS. IT WAS A VERY PLEASANT EXPERIENCE AND THEY LOVED EVERY MOMENT,” Ittipol said.

The couple has been together since they were 21 and 20 years old and their life story has become a great example of love, patience, commitment, persistence and understanding.

I ASKED THEM ABOUT THEIR LOVE LIFE AND ONLY THEN REALIZED HOW LONG 65 YEARS IS. THEY’VE BEEN THROUGH A LOT DURING THOSE YEARS, SO NOW THEY’RE VERY CLOSE.”

The story of these two went viral on social networks and users ended up celebrating with them. They are definitely admirable in keeping the spark of love alive for 65 years.