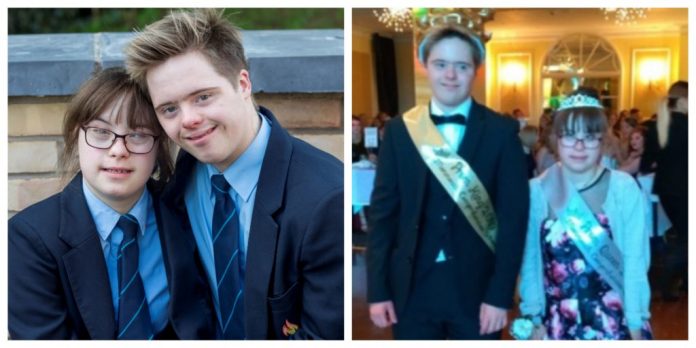 There are many stories where teens find love, friendship and more, but here is another story which you’ll like.

Two teens with Down Syndrome were crowned prom queen and king at the end of their end-of-term dance and they were really happy about it.

“He came home at midnight a very happy young man. Dylan didn’t want to take his crown and sash off – he was really thrilled.”

The two knew each other since they were kids and they started dating earlier this year.

They first met at 3, Amelie’s mother, Katherina and Victoria set up ’21 Plus’ – a charity for parents with children who have Down Syndrome.

Even though they both went to different primary schools, they soon became great friends when they simultaneously joined Monmouth Comprehensive School.

Victoria, of Raglan in Monmouthshire, said:

“They have become very close over the last 18 months and we all started to realise there was a romance going on.

“Then in March Dylan asked me if he could take Amelie out on a date. They wanted to go to Pizza Express together, just the two of them. It was a lovely idea.”

“The manager and staff were really helpful, they kept an eye and had my telephone number just in case.

“Dylan and Amelie were so excited, I was the one that was a bit nervous. I wanted to hide in the car around the corner.

“But it went off beautifully, they really enjoyed their first date just like any other teenagers.”

They have spent lot of time together and Dylan has done many sweet things like presenting Amelie with flowers before dates.

“It’s got quite serious and they are declaring everlasting love for each other.

“There was only ever going to be one girl that Dylan wanted to take to the prom.

“Their school friends think it’s very sweet and we knew they had planned a surprise at the prom.

“The evening was in full swing when we had a call to say Dylan and Amelie had been voted prom king and queen. They both thought it was fabulous.”

Dylan is a massive sports fanatic, plays rugby and also in the GB Down Syndrome swimming team. He’s also training to participate in the EU Champs in Sardinia in September of this year.

“It should be the norm that children with Down syndrome are in mainstream education and go on to jobs and live independently.

“We all have high expectations for our children so, as a family, we think of these things as normal – why shouldn’t they be?

“We should be celebrating the fact that Dylan and Amelie are part of the community and part of the school.

“They weren’t picked as king and queen of the prom because they have Down syndrome but because they are really popular pupils and everyone is really happy for them.”

There are 1,600 pupils in the school, and they hosted the event at Chase Hotel in Ross-on-Wye.

“The great esteem held for the Dylan and Amelie and their popularity within our Year 11 led to them being voted as prom king and queen by their peers.

“This recognizes the level of inclusivity and the values held by our school community.”