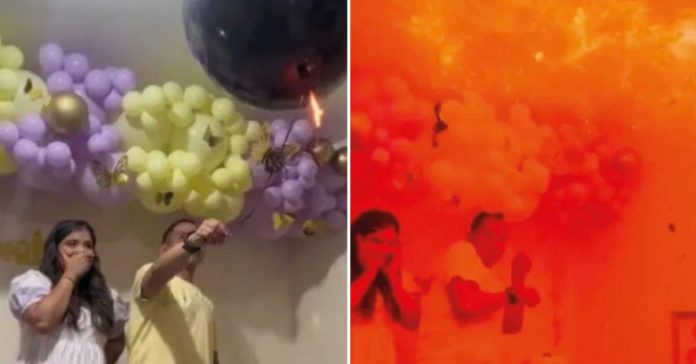 Thanks to the advancement of technology, today we have at our fingertips a window that allows us to see and learn about new cultures and customs, the detail of this is that some people cannot differentiate what is real or acceptable and perform feats such as that is presented today, where this couple wanted to revolutionize social networks with a video that will undoubtedly go down in history.

Over the years we have seen and enjoyed the gender reveal parties, which have become increasingly popular around the world, now they see it as an obligation or a sine qua non requirement to make known to relatives and friends the gender of the new family member. That is why we see on social networks how from time to time they bring up videos of curious celebrations where future parents try too hard to be as creative as possible.

However, there are those who take these celebrations to another level, where they certainly do not measure the danger and tragedy that could have been caused by the simple fact of doing something different and funny.

This Mexican couple wanted to throw an unforgettable party in their small apartment for all the guests.

What they didn’t count on was that their wonderful ingenuity almost ended in tragedy when they burned down the apartment. At the time of posting the video on social networks, it went viral in a matter of seconds, as this couple used a black balloon inflated with helium containing pink or blue powder, depending on the sex of the baby. In general, those who decide to go for this option of the balloon to make the revelation, choose to puncture them with a pointed object so that in this way the powder of the corresponding color can come out.

But this ingenious couple went further and decided to burst it with fire. What they evidently forgot or did not take into account is that fire could blow up the balloon because it was filled with helium. And so it was, after a few seconds waiting for the flame to touch the plastic balloon, a huge explosion was felt throughout the living room of the house.

As expected, all the guests screamed in fear, since the explosion caused the small balloons that were as decoration on the walls of the room to burst. However, despite the fact that it was a great scare for everyone present, most of the netizens saw the funny side of the moment and in most of the comments found on social networks, “Congratulations to the parents, you will have a dragon” predominated. .

Do not forget to share this publication and leave us your comment for these parents who did not think about the consequences of their actions by wanting to do something different for their little one’s gender reveal party. Now it will be time to wait for the surprise to be repeated and thus find out the sex of the little one who is on the way, only this time it is less dangerous.