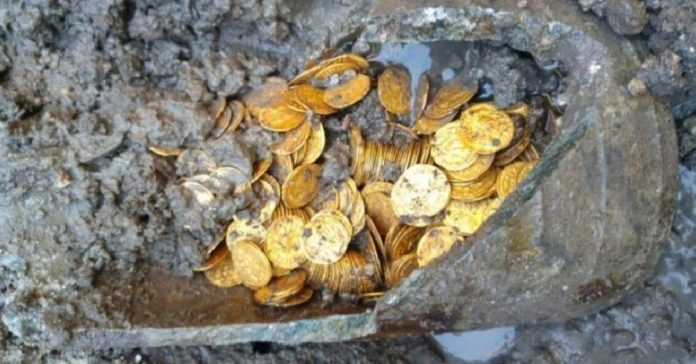 Who wouldn’t want to find buried treasure in their own home? Well, this is exactly what happened to a couple from the United Kingdom when they were remodeling their house.

The young people had the surprise of their lives when they discovered that under the kitchen floor there was a ceramic vase full of gold coins. According to the medium El Clarín , the discovery occurred in the town of Ellerby , in Yorkshire , United Kingdom in July 2019. However, they have become international news because they have just been auctioned on October 7.

The couple was doing remodeling work on their kitchen floor. There, under the thick layer of concrete and floorboards, they found the container with 264 gold coins, minted between the years 1620 and 1727 . Most were English coins; however, there was a coin from Brazil that is believed to have circulated around the island in the 1720s.

According to the London auction house Spink & Son , the loot would have an approximate value of 115 thousand dollars . He also assured that it is one of the largest coin reserves ever found in that region, and a very special discovery. Spink & Son was in charge of auctioning these coins and although the final amount is not yet known, the house was very optimistic and hoped that the coins would sell for at least 290 thousand dollars.

Auction house member Gregory Edmund said the coins belonged to Joseph and Sarah Fernley-Maisters . They married in 1694 and were a very influential merchant family during the 16th and 17th centuries . They did business with iron ore, wood and coal from the Baltic states and in addition, several members of different generations held positions as legislators.

The reason the £50 and £100 coins were buried is due to the couple’s mistrust of the Bank of England . Therefore, they most likely wanted to accumulate as much money as possible and to prevent a robbery, they hid it underground. Although it remains a mystery why no one dug them up again.