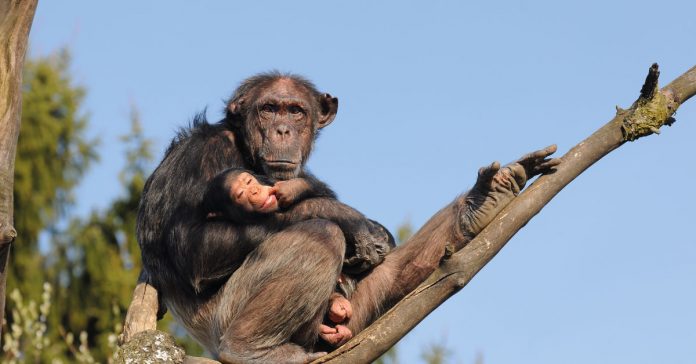 The lack of clean water in the East African rainforest has driven chimpanzees in the area to dig holes in the ground to quench their thirst.

In 2015, Onyofi the chimpanzee settled into her new troop. Almost as soon as she arrived, the East African rangers could see her digging holes in the ground. Keepers assumed that this primate came from a wild group that dug holes in the jungle, mostly because this species is known for its ability to learn different skills.

In the past, rangers have already observed this behavior, specifically in regions drier than the humid forest of this region of the African continent. When the other chimpanzees in Waibira’s group saw her making the holes, all of them without exception came closer to take a closer look.

It didn’t take long for the other members of her new family to start imitating her, digging their nails into the ground for the following reason.

The Waibira group was apparently looking for drinking water on the jungle floor. As reported by Science Focus , this behavior had only been documented in the African savannah. Never before in the humid forest, which could be understood as an opposite ecosystem.

Hella Péter was part of the team that observed the group of chimpanzees and through a statement explained that Onyofi might not be looking for water as such. Most likely, what she was seeking to do was a natural purification process:

“[…] ALL THE WELLS APPEAR NEXT TO OPEN WATER, SO THEIR PURPOSE IS LIKELY TO FILTER, NOT TO REACH THE WATER: CHIMPANZES MAY GET CLEANER OR DIFFERENT-TASTING WATER FROM A WELL, WHICH IS FASCINATING” , EXPLAINS PÉTER IN A STATEMENT.

The researchers were initially surprised, as the East African rainforest has a large number of water sources. However, during dry seasons, biological stress occurs among the species that share the space. “It seems that the few months of dry season per year are enough to cause them some problems!” emphasizes Péter.

Product of the lack of sufficient resources, the chimpanzees are digging wells, with the objective of filtering the available water. The study team came to this conclusion because they were drilling holes right next to rivers and natural watersheds. So far, according to Smithsonian Magazine , only females are taking the lead in natural purification processes.

The researchers conclude that this is one more demonstration of how the species adapts to the increasingly accelerated climate changes that its ecosystem will face from now on. Perhaps soon the slower males will also adapt to digging holes in the ground.