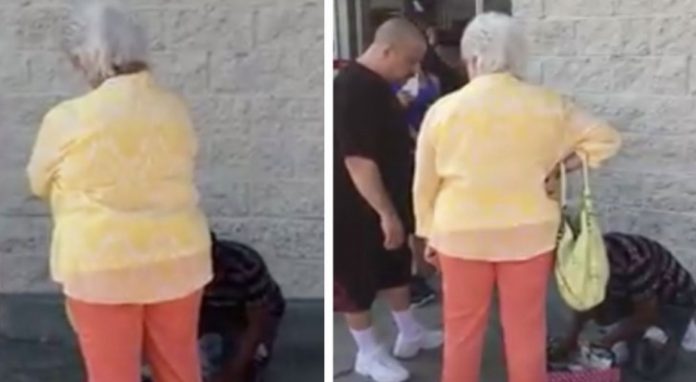 The beauty of the world lies precisely in its variety, everyone has a different character and different ideas. Monotony would make society much grayer. But in all of this, there are people who are ready to do anything to do good and help others. Some, however, do not think about others, but try in every way to get them into trouble. The hope is that there are individuals with real empathy who, when faced with a difficult situation, step up to defend the weakest.

Just like this man who, when he saw an elderly woman attacking children, felt he had to intervene.

At the center of the incident, which took place in California, were two brothers, an elderly lady and an unknown man. The whole thing was filmed by Andy Lizarraga, who, while walking with his mother, witnessed the scene and decided to take a video and post it on his Facebook page. What happened left everyone speechless.

The two siblings were standing on the sidewalk with a box full of candy. Their objective was to sell them in order to recover some money. All this happened naturally without disturbing passers-by, anyone could stop and buy these products. Unfortunately, an elderly lady approached them, not to buy the products, but to reprimand them .

The elderly woman started asking them if they had permission to stand there and sell products. The two children did not know what to answer. The woman made it clear to them that if they did not leave, she would call the police. She seemed to want to intimidate them at all costs. Then a stranger, Jay Lopez, intervened to defend the two siblings.

Jay approached the lady and urged her not to disturb these two children further, who were doing nothing wrong.

The old woman seemed unwilling to let them go, saying she would only leave if the children left. The man then asked how much all the sweets cost. The child, after a quick count, replied $80, so Jay, without hesitation, bought it all and began giving candy to everyone who passed by , leaving the woman speechless.

What do you think of this situation?