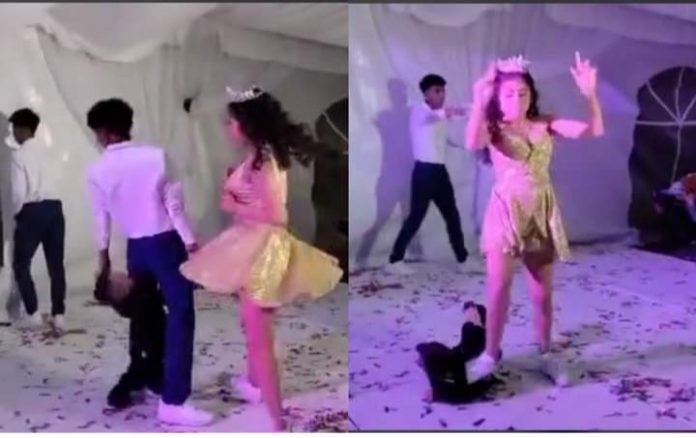 As women we know that the arrival of fifteen years marks a before and after in our lives, it is the closing of a cycle in which we are considered little girls and we become young, we are opening a path to adulthood with a firm step. That is why the quinceañera party is one of the most anticipated moments and events both by the celebrant and by the parents and relatives of the little girl. In most cases, these events have been planned with great care for many months. in advance, since many important factors must be considered so that everything goes as expected.

One of those aspects, in addition to the decoration, food and music, is the quinceañera’s waltz, because it is considered the most important moment of the whole night, where the little girl spends months practicing and rehearsing so that everything turns out perfectly. It’s your dream moment to shine and be the center of attention.

Unfortunately, this was not the case for this young lady, since her moment was interrupted by the appearance on the dance floor of a little boy who, without saying a word, went straight into colliding with the chamberlain who was dancing with the quinceañera in the entire central part of the dance floor.

In the video published on social networks, it can be seen how the young man turned his back as part of the choreography and ended up stepping on the child, however, this did not stop there, since the fifteen-year-old also gave a good stomp on the minor who was in the soil that was quickly picked up by a gentleman.

As expected, this situation sparked a wave of messages from Internet users where they completely reproach what happened.

“ For things like these, children should not attend this type of event, all they do is get in the way, they neither enjoy nor let them enjoy”. It was one of the comments that were seen on networks.

This type of accident is more common than many believe, so the fact of excluding minors from events such as weddings or important parties such as these should be normalized.

“I think that parents of young children should consider hiring a sitter for a few hours or simply refrain from attending these events.”

While on the other hand there are those who attribute all the responsibility to the parents of the children who do not set limits and allow them to do any type of mischief during the important moments of the events.

” It is assumed that the representatives of that little one should be attentive to what the minor does, not only because he completely ruined the moment of the quinceañera but because he could have been seriously injured by being trampled.”

Without a doubt, it was a moment that no one will be able to forget, especially the fifteen-year-old, who looks totally dismayed when she sees the little one at her feet.

Do not forget to share this publication and leave us your comment for this family that shows once again that children must be kept under the care and supervision of the adults in charge at all times so that this type of situation does not happen.