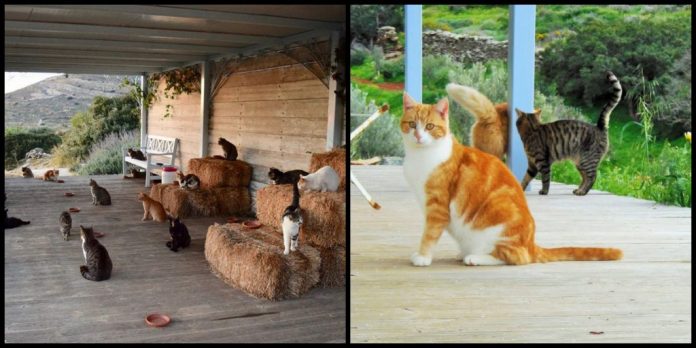 They are looking for a caretaker who can take care for the Island’s 55 cats. They were rescued by Joan Bowell and her husband over recent years.

It is secluded and it’s with a beautiful view.

It was said in the job advertisement that, “this is genuine and NOT a joke – friends, please feel free to verify!”

As Bowell needed break she wanted “a mature and genuinely passionate cat lover who knows how to handle many cats and would love their company.” They should be someone who’s preferably with “cat-whispering” skills.

American Jeffyne Telson was chosen from about 35,000 applications.

Telson is an animal lover originating from Californi. She usually spends the winters in Oregon. She is having her own rescue named RESQCATS, so, she has a lot of experience in taking care of cats.

“…I never imagined myself applying, although I had always dreamed of returning to the islands to help the Greek cats. The job would require me being away from Mitch and all my animals for several months.”

Mitch encouraged Telson to apply by telling her he would support her efforts 100%, “…this job has your name written all over it! It’s a chance to live your dream…”

After corresponding with Telson, Bowell made the journey to Santa Barbara to meet with the rescuer in person.

Telson accepted, with a caveat:

“I ecstatically accepted under one condition: the offered salary was to be donated back to the cats. Understand, I wanted the position, not because of the view and chance to live on a Greek island for free; I only wanted to help the cats and live my dream.”

Telson was used to indoor cats. So, this was little bit hard for her as these were all outdoor cats.

The two women also undertook a special project together:

“[Bowell] picked a colony at a Greek Orthodox church at the end of a mountain road overlooking the Aegean Sea. We spent the next four months rescuing the sickest and most vulnerable, as well as, spaying and neutering as many in the colony as possible. Eventually, homes were found for many of the rescues we saved.”

The experience also tested her emotionally since she encountered so many needy cats.

“I wondered, ‘How can I possibly help all these cats? How do I choose which ones to save and which to leave behind?’ I knew early on that I would have to find a way to cope with so much sadness. I’ve always said that we can only make a difference…one at a time. Somehow, I felt like I was now being put to that test.”

Like all people with a big heart, Telson realized she had to stick to doing what she could.

“I had chosen to see things in a different, more uplifting way. I had important work to do and in order to accomplish it, I talked to myself daily about focusing on the good and not being overwhelmed by the sorrow. I needed to stay in good spirits.”

With a fresh perspective, Telson is approaching her own services in a very different way.

“We all have a chance to make a difference whether it is volunteering, donating to a non-profit or standing up for a cause. So remember, even the little things you do make a difference…and doing something is better than doing nothing!”

The right person was chosen with 1000’s of applications as she handling tremendous pressure and emotional turmoil with such strength.

“Saving one cat will not change the world, but for that one cat…the world will change forever.”

They will choose another candidate for next season, so, if you’re keen, don’t hesitate to apply.