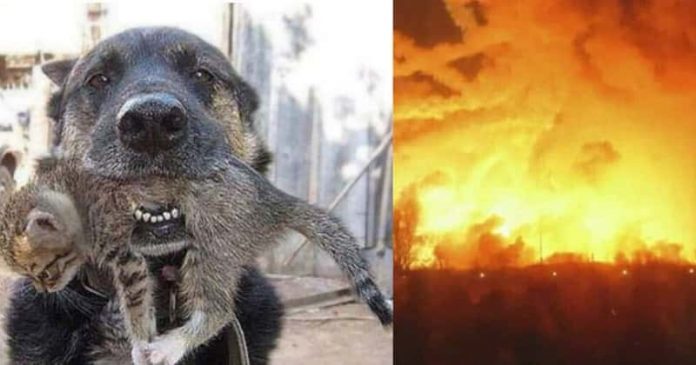 This dog would not leave his little friend behind after a massive fire breaks out.

An explosion took place at a defense company called UkrOboronProm more recently. A massive fire was created all throughout the local city of Donetsk, Ukraine, setting numerous homes and businesses ablaze because of the explosion. Many people were left injured, and some died as the skies filled with orange flames and black smoke. Some locals were able to grab their valuables and make it to safety.

And during this devastating event, a loyal pup would not leave his best friend behind. A local man rushed to get his family to safety after his home caught on fire. However, the family dog dashed back into the burning home. The owner was wondering what could have gotten into the pup. The owner wished to go back in and rescue his dog, but the flames had gotten much bigger and hotter, so he couldn’t go inside to save the dog.

Heavy fire in the area of Donetsk Chemical Plant http://t.co/KGXsvXq7cN pic.twitter.com/6g8MNmlikN via @666_mancer

The man just stared up at the flames while feeling heartbroken and confused as to why his pup decided to run to the fire. He kept calling his dog’s name with a broken heart.

Suddenly a miracle happened; his dog emerged from the flames with the family’s tiny grey kitten inside the dog’s mouth!

The family has forgotten the kitten while trying to make it out of their burning home. But, their loyal dog didn’t forget about his friend and was risked its life to save his feline sibling. The kitten most certainly would have died without his help.

The dog had been carrying the kitten in his mouth regularly before the fire, that’s why it was very calm between his big brother’s jaws.

Their hearts were filled with love and joy once locals heard about this incredible story. We can believe on silver lining that would come to help, even for a moment even in such horrendous disaster in their town.