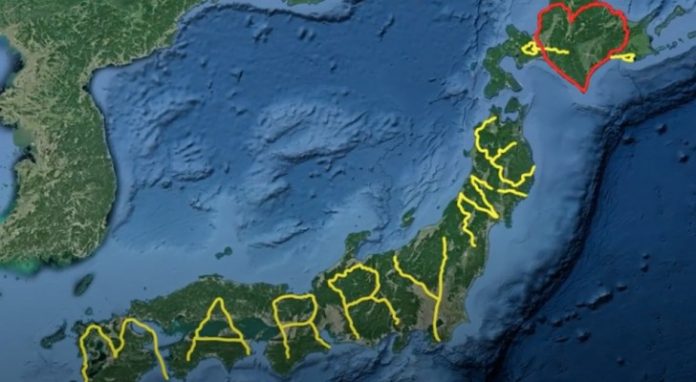 One of the most emotional moments before a wedding is the marriage proposal, perhaps even the most anticipated. We try to make it perfect, everything must be studied down to the smallest detail, one of the most important aspects being the choice of the way and especially the place to do it. At that moment, as the fateful words are spoken, it’s hard to stay calm. The mind is invaded by a single hope, that the answer to the question “will you marry me?” or “yes”.

Some people choose to make their marriage proposal in a restaurant, while others opt for a less classic option and try an original, but above all unforgettable proposal. Just like this man who asked his fiancée to marry him via Google Earth.

Yasushi ‘Yassan’ Takahashi wanted to ask his fiancée to marry him, but he wanted to do it in a way that didn’t seem trivial, but more importantly left her stunned. So he started thinking about how he could make the event special. After a while, he came up with the perfect plan: he would ask her the question through Google Earth, using “the art of GPS”, i.e. creating a digital drawing at large scale by moving with a GPS device along a certain route, which had to be studied beforehand.

Once the plan was drawn up, he thought about how to implement it and mapped out the route. The ultimate goal would be to make the words: “Marry me” appear on the Google map. It was a real feat, he covered about 7,100 kilometers in about six months.

He traveled all over Japan following a specific route to compose the inscription. After completing his journey, he showed the drawing of the map to his partner.

This feat earned Yasushi the Guinness World Record for the largest GPS drawing in history, but above all the “yes” from Natsuki, his girlfriend.

After the success of his project, Yasushi began making GPS drawings all over the world, becoming one of the most acclaimed artists in this field. Internet users greatly appreciated the way this young man proposed to his fiancée: “She is a very lucky woman, if he put so much effort into it”.

What do you think would be the perfect marriage proposal?