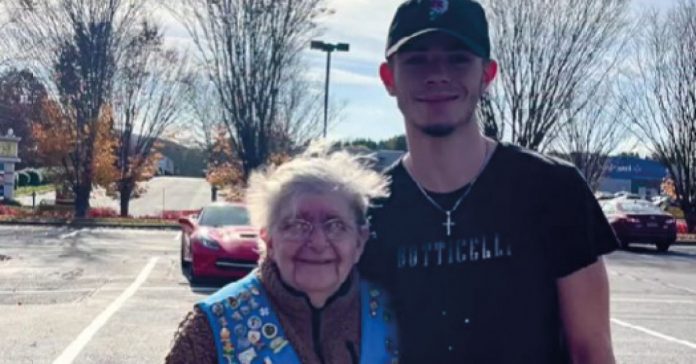 The 81-year-old woman received a generous gift from a 19-year-old co-worker.

Although the world often seems to be a hostile place, there are still people willing to help anyone in need. You can always be generous and lend a hand to someone who is in a difficult situation; One small action could change your life forever.

One of these supportive people is Devan Bonaugura , a 19-year-old boy who decided to do something nice for one of his co-workers. According to the Daily Mail media , the young man is employed at a Walmart chain supermarket in New Yersey , United States and in his free time he also creates content of all kinds for TikTok .

One day, he was in the break room at work when he noticed an elderly woman sitting with a tired expression. Devan decided to record a small video of the old lady to share on her TikTok account and accompanied it with the phrase ” life shouldn’t be so hard .”

The post quickly went viral, with many users expressing in the comments that they wanted to help the woman. They recommended Devan start a GoFundMe page to raise money for her retirement.

The woman, named Nola Carpenter , has worked at Walmart for more than 20 years and is a loyal employee. At 81, she keeps that job because she needs the money to pay the mortgage on her house. However, Devan and the rest of the Internet users thought that Nola, at that age, should be resting in her home.

After getting the staggering amount of money, Devan handed it over to Nola and also documented the moment. The woman didn’t really know the boy formally, so when he approached her to break the news about her, he also introduced himself because it was the first time they had talked about her. Devan explained to her how after the internet community saw the picture of her in the break room, they came together to help her and raise money for her to finally retire from it.

Nola accepted the nice gesture but commented that she would continue working to finish paying the mortgage anyway. Given this, Devan replied that he would give him the GoFundMe account so that he would receive all the money directly and use it however he wanted. Until now, the sum on the platform already reaches almost 200 thousand dollars.

“I feel good, and I am grateful to Devan for what he has done or none of this would have been possible. That’s why he was working at Walmart, to pay for my house,” Nola commented in a video .

He also mentioned that he will retire on the first day of the following year, as he wants to support during the December festivities. He even assured that she will miss some of the regular customers who were always looking out for her. Finally, she Nola will have the well-deserved rest from her and will be able to enjoy her own house.