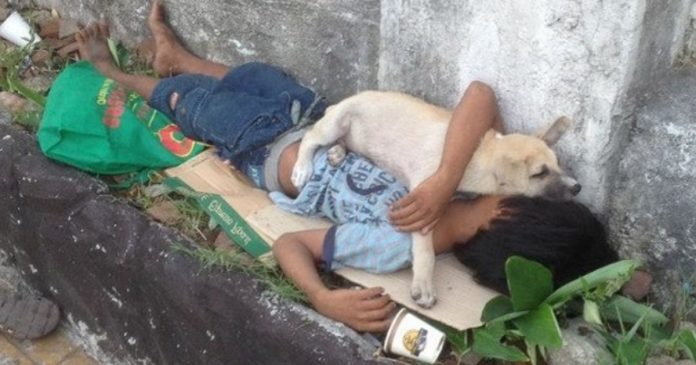 A woman captured this heartbreaking image.

The situation of poverty is something that has reached many sides of the world. The fact that the majority of people in the world do not have decent living conditions means that scenes, like the one we are going to tell you about, are repeated more than we think.

In the vicinity of Quezon City in the Philippines, there are nearly 3,000 children living on the streets, which puts them in situations of vulnerability in many ways. From health, derived from poor nutrition, cold, lack of hygiene, to the dangers of the environment where they live, such as the propensity to consume harmful substances, to suffering from various abuses.

Among these 3,000 forgotten children is Rommel Quiminales, who has lived on the street since he was 10 years old because his parents separated and neither wanted to take care of him.

Maria Kabs, a Facebook user, ran into him on the street and was touched to see him accompanied by his little dog. She got out of her car and talked to Rommel and her story broke, so much so that she shared it on her personal social network profile.

Rommel commented that he saw little Badgi (his four-legged best friend) also walking alone in the street and that’s how they became friends, going everywhere together. At some point, Badgi had to defend Rommel from other children , who sometimes want to attack him or steal what little he has been able to collect by begging on the streets.

“When those kids came to rob me, Badgi started barking, they got scared and ran away from me.” Maria comments that Rommel told her.

The little boy says he has a sister who he is going to visit when he manages to raise enough money to move to the city of San José. She also works but doesn’t earn much money , so she can’t take care of Rommel either. He just wants to always be accompanied by his little protective dog and also dreams of being able to go to school.

“I save the money I earn begging and I was able to buy a notebook,” said Rommel.

His dream is to become a veterinarian or an actor because he wants to finish school one day. He loves animals, according to Maria.

The publication exploded in the local networks of the Philippines, so there was a great mobilization to help Rommel, the most recent thing that is known about the fact is that the little boy was able to enroll in school.

“I only ask for coins, I don’t steal anything.” It is what Rommel did not stop repeating.

This is just a story that apparently ended very well for the boy, but year by year the gap between poor and rich grows, so we hope that one day not only Rommel, but all poor children will have their chance thanks more people who are interested in them. Share the note so that more people know that together, we can help each other.