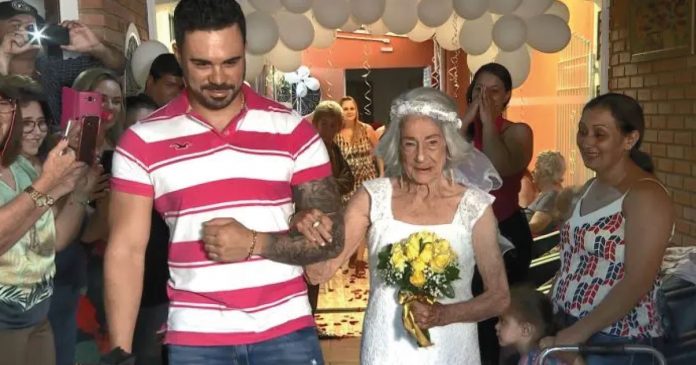 True love can come at any age

Many of us have believed that love is something youthful. That when we are in our 20s or 30s is when we should have already started a family or have found true love, however life comes to tell us that we are wrong. Love can come even in our third age.

Such is the case of Branca, 96, and Marcelino, 100, who on February 29 of this strange year celebrated the extra day of the month in the best way. They joined their lives in marriage at the nursing home where they met.

The marriage took place in Campinas, Sao Paulo in Brazil, just a few days from the 100th birthday of Marcelino , a retired engineer who claims to be as in love as a teenager with his partner.

“Pure love!” Said a daughter of Marcelino while she captured the tender images of the couple on her happiest day.

The relationship began to take shape about two years ago, when Marcelino arrived at the retirement home where he met Branca. According to her grandfather, when he crossed the door of the house he saw her and knew immediately that her heart had received the accurate arrow of Cupid , love at first sight.

For Branca the situation was almost the same, despite not throwing himself into the void of love from the beginning, he knew that Marcelino had something that called him, romance as in his youth.

“ I like everything! All! He is a love, a sweet” , says Branca smiling and happy.

Marcelino was known throughout the retirement home due to his life as an engineer, then for being one of the few to reach a century of life, now he has definitively stolen everyone’s heart by asking Branca to be his wife.

During the ceremony, Marcelino’s voice broke several times due to a discomfort in his throat, but that did not prevent him from declaring eternal love for his beloved. She on the other hand came out excited, totally beautiful and radiant from her room to meet her future husband.

Before the big day, Branca was very nervous. She said to herself, with fear: “what if he gives up? What if everything was just a vain illusion?” And he thought the same!

In the end, both said yes before the pastor who led the religious act of union, hoping that nothing will separate them in eternity. Their intertwined hands and their faces full of joy show us that love has no age and that you can always find it.

Share the story of this beautiful couple of grandparents with all your loved ones. Spread the love that they radiate so that it spreads to more people.