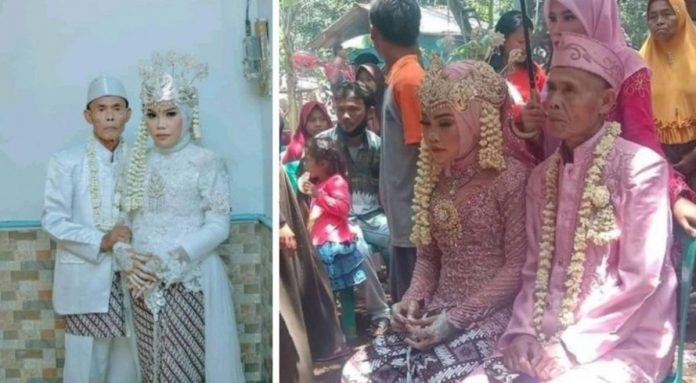 Millions of things have been said about love over the centuries, and yet no one has yet been able to come up with a definitive answer. What really matters in a two-way relationship? What weight do differences in age, culture and income have in the success of a relationship? How many obstacles can the will to stay together and be happy overcome? Of course, each couple has their own story and there are no right or wrong paths for everyone.

However, this couple’s story teaches us that sometimes differences are capable of tearing even the most loving of couples apart. Because love matters, but age sometimes does too.

The story of Abah Sarna, 78, and Noni Navita, 17, began with a fuel delivery in West Java, Indonesia. The man fell in love with the young woman while she was delivering fuel for his farm vehicles. The two started talking to each other and then dating until they decided to get married despite the opposition of many.

However, happiness was not meant to be long lasting for this couple, unfortunately. After only 20 days of marriage, Abah abruptly decided to divorce his young bride . Both Noni and her family, who had supported their union, were very surprised by this sudden and apparently unjustified decision, since the couple had had a happy life during these few days.

According to a member of Noni’s family, the possible reason for this sudden decision could be the opposition of the husband’s family, who have always been against the union, and who also opposed the generous dowry that Abah gave. given to his wife for marriage. The man had indeed given his fiancée two vans filled with household goods, 11 grams of gold and a large sum of money amounting to around 500 euros, in addition to having donated a motorcycle to the family, and despite the divorce, he did not ask to recover what he had given to Noni.