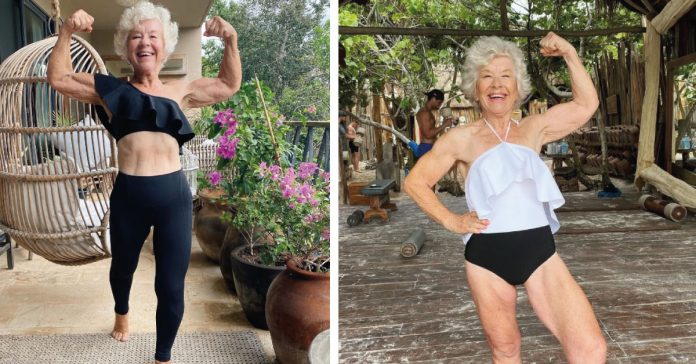 A resident of the city of Ontario, Canada and 76 years old, Joan MacDonald became very popular on Instagram for her incredible transformation. The woman went from being an unknown to having a place in the world of fitness, in just five years she managed to completely change her life.

In her publications she has told about the whole process that she decided to start, although she had problems with her weight for a good part of her life, Joan wanted to start her seventh decade in the healthiest way. At 1.60 meters tall and weighing almost 90 kilos, the Canadian suffered from high blood pressure, had edema in her ankles and dealt with painful arthritis.

5 years later and with some changes in her lifestyle, Joan is in her fullest and healthiest stage, her state of health has improved markedly.

In fact, her eldest daughter Michelle is a physical trainer and it was she who invited her to have a transformation. 2017 marked the beginning of Joan’s journey alongside Michelle and other women who also wanted to change her habits.

With a good diet and focused exercise, MacDonald saw changes almost immediately. In an interview for Good Morning America , the elderly lady told a little about her daily routine. She commented that her training consists of lifting weights, but that sleeping 8 hours a day, drinking plenty of water and eating healthy foods are the key.

His diet prioritizes the group of macronutrients: fats, carbohydrates and proteins, without neglecting other foods. Today, she weighs 58 kilos and has been maintained thanks to his discipline.

“Nothing is magical. It’s an occupation, but it’s a job you can enjoy. In the end, you will be stronger and healthier, and that’s all that really matters, ”she told ‘Good Morning America’.

The so-called “fitness granny” created an application to share her exercise routines with her thousands of followers. She also opened a YouTube channel to reach more people and help them as they did with her years ago.