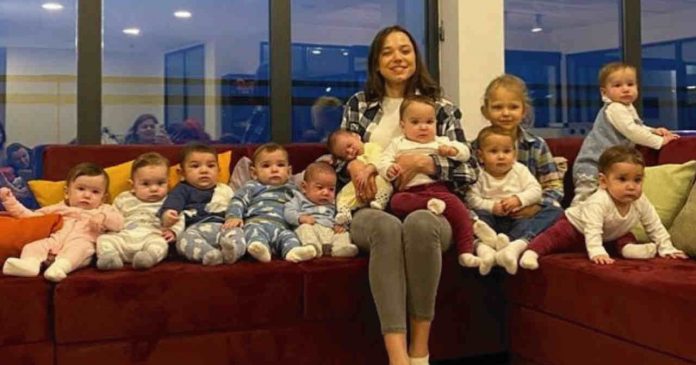 Christina Ozturk, together with her husband, the Turkish businessman Galip Ozturk, have formed a family with 11 children. The first daughter, Vika, was born from her own mother’s womb, while the remaining 10 were born from rented wombs, but genetically from the couple.

This couple has given much to talk about recently, for the incredible reason of wanting to have as many as 105 children, if possible. The 23-year-old Russian woman assures that having children has been a delightful experience, and that she and her husband are willing to continue creating lives until they become the largest family in the entire world.

The large family is based in Batumi, a city on the coast of Georgia; where the figure of womb rentals is legal. In addition, with the large amount of money that Galip has, he does not mind continuing to invest his money renting wombs, as long as he achieves his longed-for dream. That, according to studies carried out, each rented belly costs around 9,700 dollars.

It should be noted that the selection process for surrogate mothers is carried out by the Batumi clinic itself, who also assume full responsibility. “We don’t personally know the surrogate mothers or have direct contact with them to avoid problems after the pregnancy,” Christina said. Despite this, the woman likes to keep track of each surrogate mother’s diet, so she draws up diet and nutrition plans for each one.

What do you think of this extravagant goal? Do not forget to share.