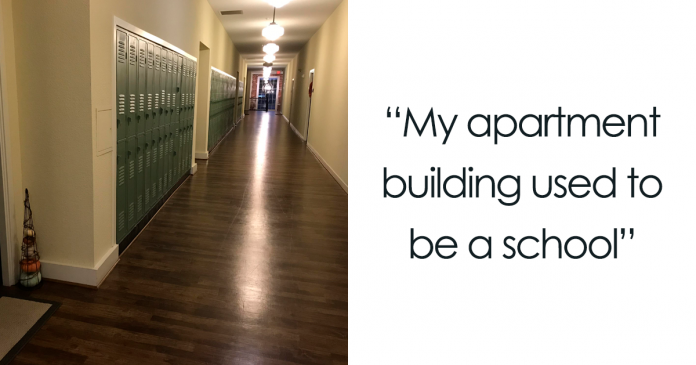 Buildings also get old over time like many other things. But it should not be demolished just because it is old. There are some architects and interior designers who see old factories, churches, and even clock towers as perfect canvases for unique and non-traditional living spaces.

Here we have a collection of old buildings that were given a second life by architects. Churches turned into breweries, jails turned into hotels, and even malls turned into colleges. You can enjoy them below.

#3 Hotel I Stayed At Was Formerly A Train Station And Had An Actual Train Inside It, With Rooms Inside Each Car

#5 My Friend’s Living Room In Brooklyn, NY. The Apartment Is Built Inside An Old Church

#6 This Former Theatre In Buenos Aires Transformed Into A Bookstore

#7 Church Repurposed Into Dominicanen Bookstore In Maastricht, Netherlands Is Now In The Top 10 Most Beautiful Bookstores Worldwide

#13 Some Lucky Bastard Gets To Live In This Church

#14 My College Used To Be A Shopping Mall

#16 My Apartment Building Used To Be A School

#17 Revitalized One Of The Last Remaining Art Nouveau Brewhouses As A Bar, In The Middle Of Fürth Südstadt

#18 House Used To Be A Police Station And My Bathroom Is An Old Jail Cell, The Original Window Is Still In Place

#19 Former Power Station Converted Into An Industrial Cafe And Restaurant With Exposed Brickwork And Abundant Planting In Melbourne, Australia

#20 This Hotel Used To Be A Brewery

#24 My Hotel In Oxford, England Is A Former Prison

#26 This Starbucks Drive-Thru In An Old Car Wash

#28 My House Is A 20,000 Sq Ft 1926 Former Freemason Temple That We Have Been Renovating By Ourselves While Living Inside For The Past 2.5 Years

#29 My School’s Library Used To Be A Bank

#31 Church Turned Into A Trampoline Park. The Hague, Netherlands

#32 My Hotel Room Used To Be A Chapel

#33 This Thrift Store Used To Be A Bowling Alley

#35 This Old Pool Converted Into Apartments

#37 My Apartment Used To Be A YMCA

#38 This Satellite Lab Used To Be A McDonald’s

#39 This Grocery Store Used To Be A Hockey Stadium

#40 My House Used To Be A Bank, So We Use The Old Safe/Vault As A Basement