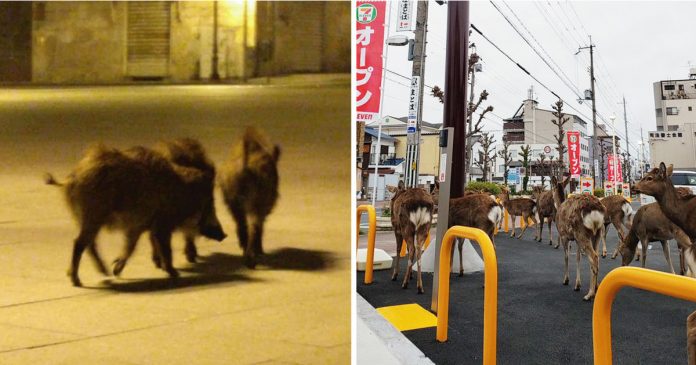 The animals return to the city

As lockdowns unfold in different countries, people are starting to stay home while watching movies, social media dramas, or a good book.

While some governments encourage walking outdoors (as long as you keep a distance from other people), many people forget about the outside world altogether.

Nature, however, does its thing while people are not there and an unexpected result of the quarantine is being noticed. In countries like Japan, Italy, and Thailand, people observed animals roaming the streets due to human absence.

In Japan, deer that are local to Nara Park were observed taking to the streets in search of food. The park is usually packed with tourists, as the Sika deer that live there are a local attraction.

Tourists would usually buy crackers sold in the park specifically meant to feed the deer, however, as visitor numbers have plummeted in recent weeks, the deer seem to have no choice but to venture out of their territory to find something to eat. to eat.

Many photos and videos of the deer roaming the streets of Nara have surfaced on social media. People who responded in shock or amazement. Twitter user okadennis who posted a series of photos of the deer reported that the occasion was amusing.

The country with more than 30 thousand cases also observed a similar phenomenon. Numerous accounts of various animals (such as sheep, wild boar, and horses) roaming the streets appeared on Italian social media. Most of the people who posted their observances were quite amused by the situation despite the circumstances around them.

Share this note so that more people see the impact on the animal world of the lack of humans on the street.