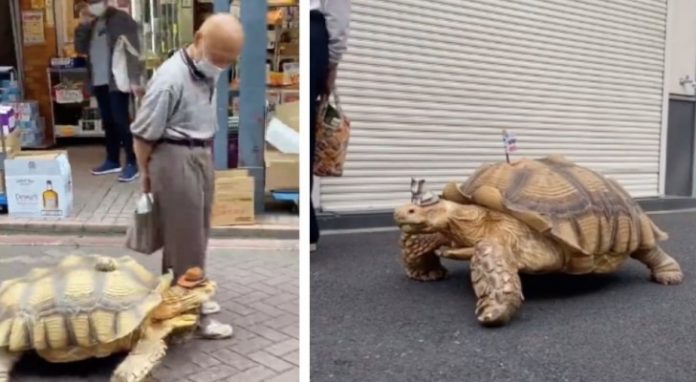 Very often, while walking, you can come across small curiosities or really unusual and funny scenes. Usually on the street you can see people walking with their dog next to them, at most a cat or, if you meet atypical people, a guinea pig, but you rarely happen to see someone walking down the sidewalks of a city with a turtle, wearing cute little hats.

Passers-by must have, in this case, rubbed their eyes thinking they were still asleep or thought it was an optical illusion because they couldn’t believe what they were looking at was true, namely that an elderly gentleman was walking a turtle. Some may have laughed, others may have been moved, but the common feeling was certainly astonishment.

The scene was captured by a passerby and shared by the Animals_being_epic and Naturre Instagram pages . In the video, we see a man walking and beside him, a little behind, is his pet, a turtle. The latter wears a cowboy hat and follows its owner. One of his legs is attached by a small rope to the leg of his human friend so that he can orient himself better, but above all to prevent him from getting lost or disturbing passers-by.

A very curious situation to observe, so much so that it aroused the interest of all those present, who approached to pet the tender animal. What makes the story even more outlandish is the bizarre cowboy hat the creature wears. An unusual spectacle that not only intrigued passers-by, but also aroused great curiosity on the part of Internet users.

The comments were numerous, and most of them were moved by seeing the turtle following his friend with his slow step. But many others wanted to joke about the situation, some joking about the animal’s size “it’s not a turtle, but a dinosaur”. Then there are those who focus on the old gentleman, claiming he is “the Master Master Turtle from Dragon Ball”.

What are the quirkiest pets you’ve seen?