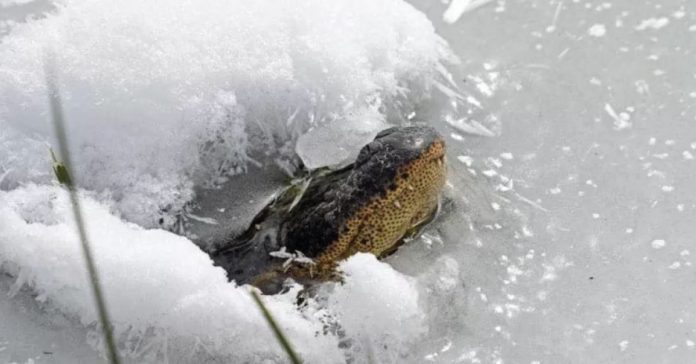 Alligators in Oklahoma are turning into popsicles, and locals are worried about the species.

The inhabitants of the state of Oklahoma in the United States have found themselves face to face with completely frozen alligators. The reptiles had their snouts sticking out of the icy water when the cold front hit the state this week.

The question everyone is asking is why were these alligators diving in such cold weather and not sunbathing on the shore or in some hiding place?

The truth is, many were surprised to find out that Oklahoma had alligators. This news sparked a debate on Facebook about whether these Mississippiensis Alligators were a native or introduced species to the state.

According to a journal from 1866, they appear to be native, although other alligators have been introduced to the wetlands in the southeastern part of the state since then. This said Jena Donnell, Wildlife Diversity Communication Specialist at the Oklahoma Department of Wildlife Conservation.

Returning to his strange behavior, Donnell stated that this was completely normal.

“Whenever it freezes, this is a natural response [seen in alligators],” he said. Since the water they were in froze, they had to create a ‘snorkel,’ so they stuck their noses out of the water so they could breathe.”

Alligators, like all reptiles, are cold-blooded, or ectothermic. This means that their body temperature depends on the temperature of the environment. For this very reason we usually find alligators basking in the sun or hiding on the shores of lakes and rivers.

When their habitats are hit by freezing temperatures, crocodiles prefer to be in the water, as the air on shore can be colder than the water itself. Rather than hide somewhere, alligators prefer to swim to the surface and dive, making sure they have enough oxygen.

“If the water is cold, but not yet frozen, alligators will often swim into deeper water, which is warmer than the shallows,” Donnell said.

Unfortunately, not all of the alligators survived the cold snap at the Red Slough Wildlife Management Area, a 2,300-hectare refuge in southeastern Oklahoma.

Donnell didn’t immediately know how many alligators died during the cold snap, but those that did were young: “ Most of the adults were able to survive the cold weather event, he said. It is always fascinating how animals adapt and how they can search for different survival techniques .”

Icy temperatures and conditions are frequent in the southeast of the state. On average, McCurtain County, where Red Slough is located, has about 60 days a year with temperatures below 0 degrees Celsius.

Snorkeling alligators aren’t unique to Oklahoma, either. They have also been seen in North Carolina in 2018 and 2019.