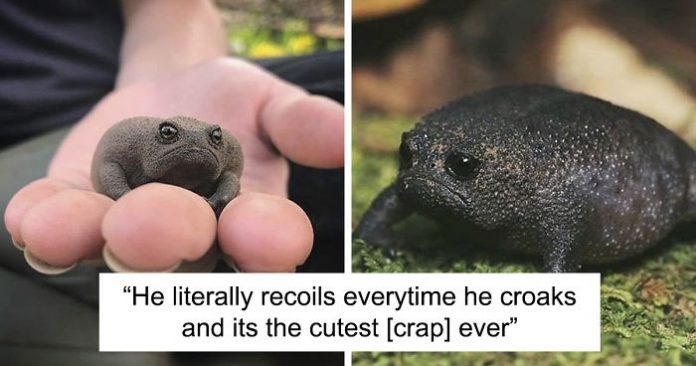 You may think that this frowning frog is disappointed or sad, but the truth is that’s how the Black Rain Frog looks.

They can be only found on the southern slopes of the Cape Fold Belt in South Africa at elevations of up to over 3,300ft (1,000m). The Black Rain Frog inhabits fynbos and forest fringes and doesn’t even need the presence of open water since it is a burrowing species.

The Black Rain Frog will puff up and enlarge its body, adopting a more aggressive behavior when it feels disturbed and threatened.

It doesn’t mean that the Black Rain Frog hates company. The female will secrete a sticky substance on its back to keep the male from falling off in the mating season which is known as adhesive amplexus. It doesn’t like to let go of its partner.

The desert rain frog is native to a small coastal strip of land between the African countries of Namibia and South Africa. This frog most of the day buried in sand dunes.

Its flanges which are on its back feet act as little diggers to more easily navigate its coastal terrain.

The small patch of the world that they inhabit is prone to sea fog, which keeps the sand moist in an otherwise arid region. Their patch on their bellies is transparent and also has numerous blood vessels and capillaries through which they can absorb water directly from the sand.

They got their name due their ferocious roar. As wildlife photographer Dean Boshoff bravely discovered when shooting at the dunes along Port Nolloth in the Northern Cape provinc, this one goes all out in defending its turf.