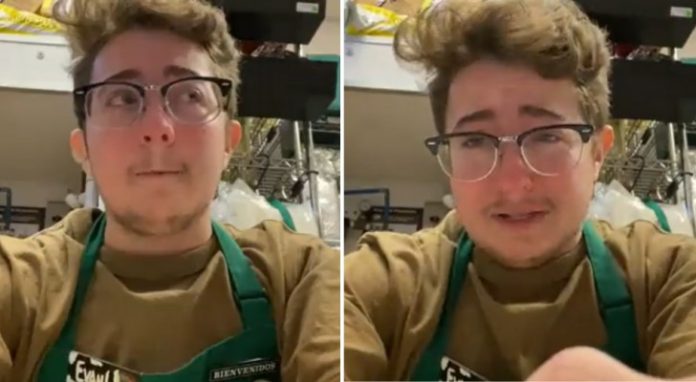 Not everyone likes to work, but some are luckier than others: they have managed to turn a passion into a profession or, in any case, have found a job that they like to do, without boredom or reluctance. Of course, each profession has its advantages and disadvantages, but what they all or almost all have in common are working hours: we speak of part-time when the duration is 4 hours or 20 per week, and full-time, the most common, when the working day is 7 or 8 hours. For someone, however, it seems to be particularly distressing: the employee of a well-known chain decided to complain, in a video that later circulated on the web, about the hours of work he was doing, and ended up bursting into tears.

The young waiter in question works at Starbucks and, during one of his shifts, he got so discouraged that he filmed himself in a video that quickly went around the web. The reason ? The employee spoke about the rudeness of some customers and some work management issues. So far, nothing particularly strange: these are problems that many people encounter in the course of their work, even if not everyone talks about them openly on their social networks.

But what caused a stir among users was the real reason that brought the young man to tears: according to him, who still devotes himself to his studies, working 25 hours a week and working eight-hour shifts on weekends -end is too hard. It’s a shame, however, that a standard working day lasts exactly that long, a fact that netizens were quick to point out to him, with nasty judgments and criticisms.

The reputation of young people in the world of work is well known: most adults and employers see them as lazy, lazy and unwilling to work. So when faced with a young employee indulging in a moment of vulnerability, publicly crying over something that everyone considers absolutely normal, the web’s reaction was rather predictable.

On Twitter, many accused him of being spoiled, but there were also those who rushed to his defense, arguing that some jobs can be truly untenable. It was probably a combination of factors that brought the boy to tears, but the only one considered was, “How is it possible you can’t endure eight hours of work?”