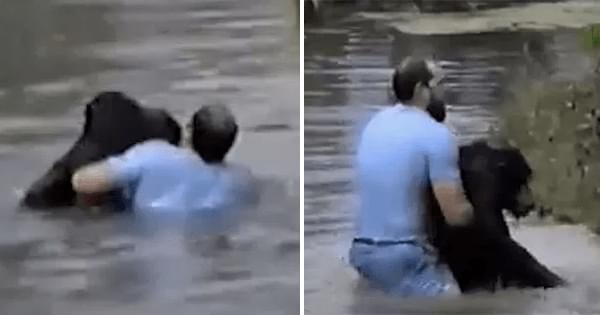 Humans have an amazing bond with animals. Even though many people love animals, not all would risk their lives to save them. But, this man just goes long to save one.

Rick Swope visit to the newly opened chimpanzee exhibit in Detroit with his wife and their three children in order to have a fun day filled with excitement. They wanted to see chimp games at the Chimps of Harambe exhibit. But, they were more excited than they were hoping for.

Two chimpanzees were fighting near the water. The smaller chimp named Jo-Jo ran towards the trees and the bigger chimp which was more aggressive followed him.

The bigger chimp caught up with Jo-Jo and Jo-Jo fell into the water when trying to escape. Chimps can’t swim and he was seeking help.

The staff didn’t want to save the chimp. So, Rick decided to rescue him. While the staff tried to warn him not to go in as the apes can be incredibly aggressive and territorial, he ran toward the edge of the exhibit. He didn’t care about what others said and jumped into the water to save Jo-Jo.

He swam to Jo-Jo and grabbed him by his left arm. Rick used the rest of his body to get them out of the water. Jo-Jo was really terrified as Jo-Jo didn’t move in Rick’s arms.

Rick gave Jo-Jo a push to get him up to the grass when they reached the edge of the water. Jo-Jo was about to fall back into the water and Rick made sure he was all the way on the grass.

Rick later said on Animal Planet, “When I finally got him up the bank and I could hold him up there, he wasn’t moving. He was lifeless, but he was looking at me when I got him turned around, so I knew he was alive.”

While Jo-Jo was safe, Rick needed to worry about his own safety as even experts aren’t always willing to go near the chimp’s territory and Rick was right next to a chimp. The crowd yelled at Rick to stay with Jo-Jo to make sure he was alright. Meantime, some other chimp was already on his way to Rick.

Rick swam very fast to the border of the exhibit and climbed out. He’s a superhero to save the helpless Jo-Jo.

He explained to the Desert News, “Everyone in the whole place was just standing around and watching this monkey drown. When he went down the second time I knew I had to do something.”

Rick is a superhero as he didn’t even blink an eye; he immediately came to rescue the helpless animal. It proves that there are still people who care about animals. We are happy that both Rick and Jo-Jo are safe.