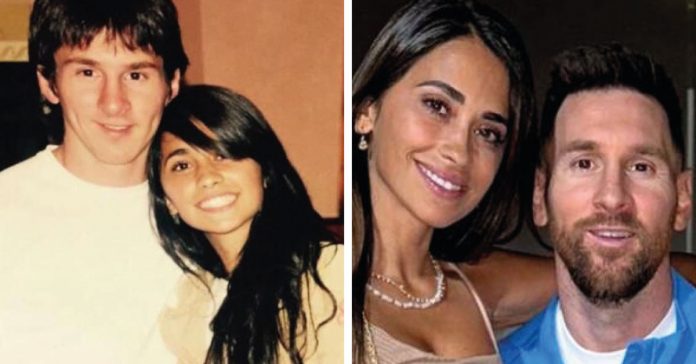 Lionel Messi and his wife Antonela Roccuzzo have been together for more than half their lives, they have seen each other grow, mature, succeed and above all, they have formed a family. His story is worth telling and difficult to repeat.

They both met when they were just children in Rosario, Argentina, for years they were separated until they met again and since then they have not separated. She was in the most important World Cup for the “10” of the Albiceleste and saw him crowned world champion.

He, 35, and she, 34, made it official at a ceremony in 2017 , however, they had been very serious for years. First as childhood acquaintances, friends and then they maintained a long distance relationship.

His story began when Lio was just 9 years old and Anto 8, she came into his life by coincidence, as she was the cousin of his friend at that time, little did he imagine how important that moment would become for his future.

When Barlecona opened its doors for him to continue his professional career, he accepted, moved to the city in 2000 but she stayed, despite the distance, they talked whenever they could and he traveled to Argentina to see her.

The World Cup in South Africa meant the moment to formalize their courtship; Antonela decided to move in with him and live together, they were 21 and 20 years old respectively.

Ten years ago they received little Thiago, in 2015 Mateo and Ciro arrived in 2018, who is apparently the last member of the family. Their wedding was a year earlier and they decided that it would be in Rosario, their hometown and where they met, only their closest family and friends accompanied them.

They currently live in one of the most luxurious areas of Paris, in Neuilly-sur-Seine, west of the French capital.