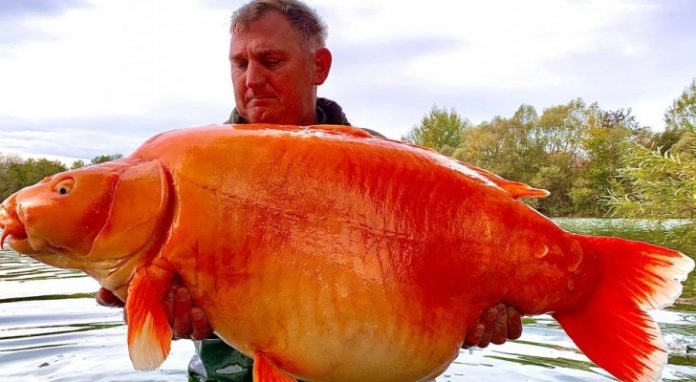 Fishing is a very popular sport, practiced above all by those who love peace and quiet. Waking up before sunrise to go to the lake, the sea or a river, take your fishing rod and cast the hook in the hope that a fish bites.

The key word is peace of mind, you don’t have to be in a hurry, sooner or later you manage to get something out of the water. This fisherman did not lose his composure and managed, with difficulty, to catch a gigantic goldfish . Let’s see how he did it.

His name is Andy Hackett, and he is a 42-year-old fisherman who often goes to the Bluewater Lakes aquaculture farm in Champagne, to indulge in his favorite activity. But he would never have imagined that day that he would manage to catch “the Carrot”, the biggest fish in the lake , which has now become a legend. “I knew, said the man, that the Carrot existed and I always wanted to catch it.”

This is no ordinary goldfish, but a hybrid species between common carp and koi carp (ornamental fish commonly found in ponds). It weighs up to 30.5 kg , which would make it the largest goldfish ever caught, the previous record being around 17 kg.

It is said that this fish was introduced to Bluewater Lake about 15 years ago, but no one had ever managed to catch it until now. It was even believed to be just a widespread myth among local fishermen.

“I knew something big had snagged my bait. It was a gigantic fish, which first went down deep and then came up to the surface about 30 or 40 meters from me. At that time, I realized it was orange in color. It was great to catch it, but it was also pure luck.”

After catching the Carrot, the fisherman took it out, weighed it and photos were taken to immortalize this wonderful moment. Subsequently, it was thrown back into the water. Now, this creature is an integral part of the lake, “you can’t think of Bluewater without its iconic goldfish.”

Andy had a real adventure: did he then let go of La Carotte again?