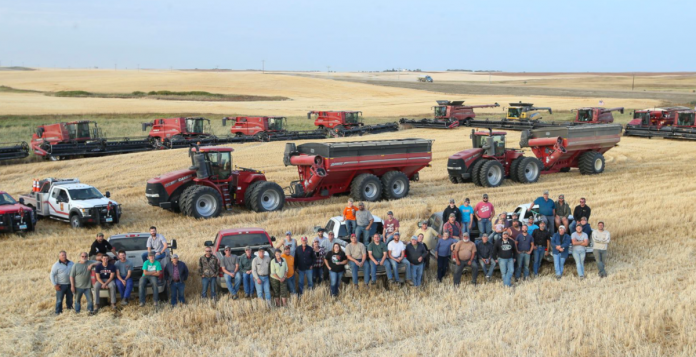 Even though I’m not a farmer, I live in a rural community. So, I know how these people committed to their life. They are also committed to each other. As farmers have no choice, they are survivors. Their family’s livelihood is depending on weather and their harvest can cripple on a personal injury or a couple of bad days. Most farmers live year-to-year and they wish that it’s not a bad year. Nothing can help a farmer overcome a drought, and also nothing can keep a man in the fields when he’s had a heart attack.

A farmer of durum wheat and canola from Crosby, North Dakota named Lane Unhjem was working on putting up his harvest when he realized that his combine was on fire. Lane started having a heart attack as he was working to put out the fire. He was quickly rushed to the hospital as he realized that something urgent was happening inside his chest. He slowly started his recovery in the hospital. Meantime his crops were ready to be harvested and their farmer was out of commission.

You reap what you sow! Thats the old saying that can apply to a lot of things in life. Well, today it has a two fold…

My wife, a gardener has taught me that when a garden is ready to be picked, it has to be picked. The local farmers, Lane’s neighbors, and friends banded together to save Lane’s harvest. Don Anderson, one of the farmers posted a photo to Facebook that shows how they helped Lane. In his Facebook post, he explained, “Approximately 40 to 50 farmers, driving combines, pulling grain carts, driving semis and various other harvest related items, converged on the Unhjem farmstead and they will take care of harvest for Lane and his family today.”

Anderson added that there were dozen combines on Lane’s farm to gather the harvest. There were about 11 combines, 60 farmers, 15 semis, and six-grain carts according to KFYR-TV, and altogether they got the work done, harvesting 1,000 acres in less than seven hours. Jenna Binde, a family friend, said that when the word got out, it spread like wildfire, and farmers and owners of equipment were offering up their time. People from all over the county were volunteering their equipment and their workers. She said, “You help your neighbor out when they need it, and don’t expect anything in return.”

They all have a great sense of pride that when they face some bad incidents they’re not alone as Don Anderson said.