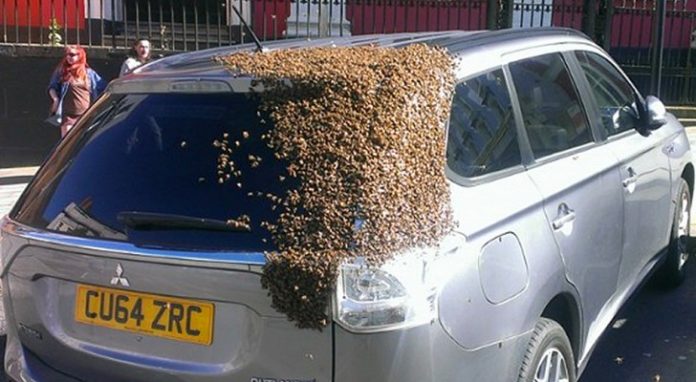 Although we are often led to believe that dogs are devoted and loyal animals, the story we are going to tell you is one in which bees are unbeatable in terms of dedication and stubbornness.

Carol Howarth, a 65-year-old from Haverfordwest, Wales, knows all about this, as she has encountered not one, but thousands and thousands of these tiny, needy insects up close. A situation she didn’t even notice at first, and which for many – especially those who don’t have a good relationship with insects – could be a nightmare come true.

It was an ordinary day for Carol, who had parked her Mitsubishi in a fairly busy area of ​​the town of Haverfordwest for various errands she had to do. Little did she realize, as she went shopping, that the car would be an irresistible magnet for a colossal swarm of bees. The reason? It’s simple: their queen was in the car, and the others had no choice but to follow her and save her.

Do you have any idea what it’s like to have 20,000 bees chasing it, tenaciously glued to your car? Carol Howarth experienced it firsthand, and the story she lived is truly amazing. When the swarm was noticed around the car, a crowd of passers-by gathered around the car, and beekeepers were called in to remove them. At first, the situation seemed resolved, but the bees, having failed to find the queen, did not give up.

The next day, Carol says, I realized that some of them had followed me home. ”She then called in the experts again, who understood that the queen bee must be stuck somewhere in the room. car, probably attracted to something, maybe a sweet smell or a small empty space around the rear wiper.

It was in the trunk of the car that the swarm gathered, doing its best to save it, even if it meant following Carol’s Mitsubishi for two days in a row! A real mission, which could not be concluded without success, that is to say until the queen and the “subjects” were happily reunited.

“It was spectacular,” said Tom Moses, a local resident who immortalized the scene and called the beekeeping team. “I was driving and I noticed this big brown spot, I was really amazed, everyone was taking pictures.”

It is not every day that we see such a scene: once again, nature has shown itself capable of true wonders. Luckily, all turned out well, both for the precious and dedicated bees and for Carol!