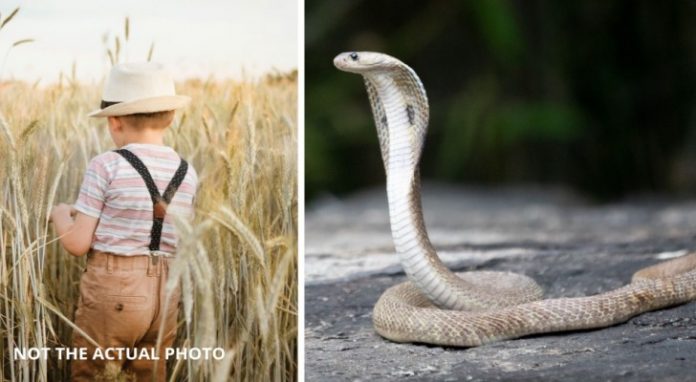 Animals are adorable, but there are some that are better to stay away from. There are small creatures that you want to pet as soon as you see them, but there are others that may not be as harmless as they seem. So always approach them with care and not disturb them, because if you annoy them, even the nicest little beast on the planet could react by scratching or biting.

That’s what happened to this boy. While he was playing, a cobra attacked him, but he managed to get rid of it. Let’s see how he did it.

His name is Deepak and he is an eight-year-old Indian boy. He lives in the village of Pandarpadh in the central region of India, Chhattisgarh. This area is known for the presence of various reptiles, which roam freely. This adventure also saw him have an encounter, certainly not pleasant, with a snake. The boy was playing in the yard of his house when suddenly, without even realizing it, he felt something on his hand: a cobra had wrapped itself around his arm and started to squeeze it.

Deepak didn’t know what to do; at times it is very difficult to stay calm. The first thing he thought to do was shake his arm in hopes the snake would break loose and fall to the ground. The cobra, however, wouldn’t let go of its grip and just then it bit the boy.

“At that time, says the boy, I did not know how to act, I just thought of doing the same thing as him. So, as the reptile did not move when I tried to shake it, I brought my arm closer to my mouth and bit it hard twice . It all happened in a flash.”

After Deepak bit the snake, it immediately let go of its grip and fell to the ground, lifeless. As soon as the boy broke free, he ran to his parents and told them what had happened. The father and mother wasted no time and took him to specialists to make sure their son was okay.

Fortunately, nothing happened to the boy, but it is certain that even though he acted recklessly, he managed to save himself. How would you have behaved in such a situation?