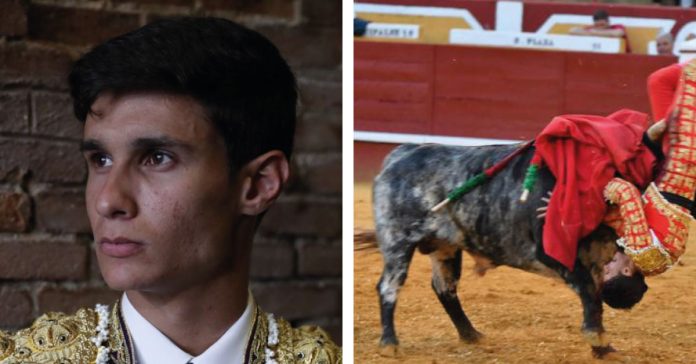 The young man suffered the accident when he was about to end the life of the bull.

A 23-year-old bullfighter was gored directly in the right thigh during a bullfight in Segovia, Spain. Manuel Diosleguarde suffered from a perforation of the femoral artery and the saphenous vein. The wound is 25 centimeters deep and the bullfighter is currently in critical condition fighting for his life.

Diosleguarde was gored when he was about to kill the bull, in the last part of the bullfight in Cuellar that was held this Sunday.

The bull completely broke the femoral artery and vein, in addition to breaking numerous branch veins and destroying the bullfighter’s right leg.

“They told us that everything bad that could happen to him, they have it under control and that everything, within gravity, is going well and without setbacks,” confessed his representative José Ignacio Cascón.

So far the bullfighter has been operated on three occasions to save his life. However, his situation remains delicate. The doctors had to reconstruct the damaged area as well as avoid complications from possible thrombi and clots that could arise in his right leg.

The trajectory of the goring was downward, which also caused great damage to the vastus medialis of his quadriceps.

In 2013, bullfighting was declared Cultural Heritage of Spain by the Senate with the sole support of the Popular Party. The rule, published on November 12 of that same year in the Official State Gazette (BOE), obliges public administrations to ‘guarantee and, in turn, develop promotion and protection measures in the field of the General Administration of the State’.

However, not all communities firmly support bullfighting, understood not only as bullfighting, but as ‘the set of knowledge and artistic, creative and productive activities, including the breeding and selection of the fighting bull, which come together in the modern bullfight and the art of fighting’.

In recent years, movements in favor of animal rights have been gaining strength and have managed to stop bullfights in certain parts of Spain, although they cannot be prohibited.

Thus, the only Spanish autonomous community in which, by law, to this day, bullfights are not carried out is the Canary Islands. In the archipelago there is a law, which dates back to 1991, which states that it is prohibited ‘to use animals in fights, parties, shows and other activities that involve mistreatment, cruelty or suffering’. The norm was approved quickly and with hardly any opposition, because the Canary Islands never had a very strong fondness for bullfighting.