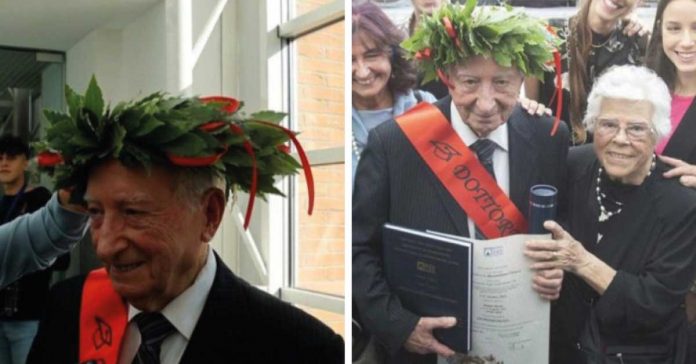 Definitely in this life it is never too late to fulfill your dreams, we have that mistaken idea that there are certain ages or stages of life that are destined for certain very specific things, such as having children, a stable home or graduating before the age of 30 .

It is important that people see and above all understand that life is simply to live it, but to do it well, we must not allow the years to pass before our eyes without being able to have fulfilled those dreams and desires that we so desire and an example of This is the story of this tender and exemplary grandfather, who throughout his life worked in many jobs, such as tailor, seller of sweets and street food, but always had the determination to study law.

Oscar Mattei, 90, from Rome, Italy, graduated with one of the highest grades of his class. Despite the fact that in most countries accessing education represents a considerable degree of difficulty, this grandfather never lost his mind and with a lot of effort and sacrifice he was able to reach the desired goal.

This man is the great-grandfather of 9 grandchildren and recently became a Doctor of Laws after completing his academic load and passing each of his subjects, being praised by each of his professors and even by the director of the institution, who defined him as ” a model student.

Its main characteristic was built based on his enthusiasm and that tireless desire to be able to acquire knowledge and be able to live new experiences. And that is exactly what he would like to pass on to his grandchildren.

“ I want them to see and above all to understand that life has to be lived, that it is never too late to achieve your dreams and that when you really make an effort to pursue them, life itself gives it to you”.

Although many people did not give credit to his effort because they saw him too old to study and finish his degree, this grandfather never gave up and kept going.

“ All my colleagues, much younger than me, were surprised by my energy and desire to continue”.

It was known that the authorities of the institution congratulated him, since the grandfather at 90 years of age graduated with honors, obtaining a grade of 100/110, one of the highest at the University of Rome.

Do not forget to share this publication and leave us your comment for this grandfather who shows all the new generations that it is never too late to start and pursue your dreams until you see them materialized.