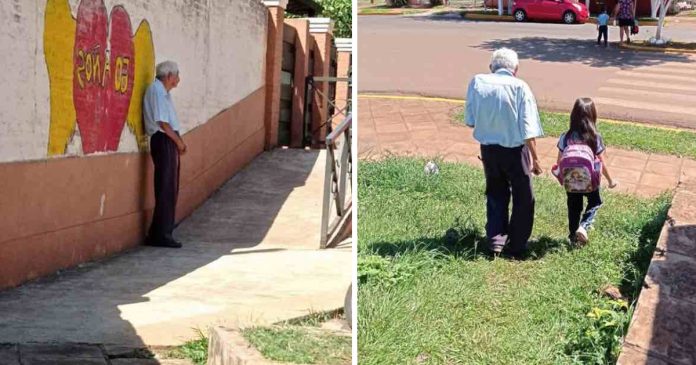 Although his life has been difficult, Eliodoro Maciel Centurión does not give up and does his best to give his family a lot of love.

A grandpa went viral after his story was shared on Twitter. Eliodoro Maciel Centurión is an 88-year-old man, originally from Paraguay, who accompanies his great-granddaughter to his school every day , according to EXTRA.

Despite his advanced age, Eliodoro still has the energy to be with part of his family and accompany them to multiple places since life denied him having a family of his own.

Loreley Roa, mother of the minor, is not Eliodoro’s direct granddaughter, he is her grandfather’s brother. The man never had a family of his own as his wife died 3 years after they were married.

Loreley’s daughter, 7-year-old Genesis, is accompanied by her great-granduncle every day on her way to school. According to Loreley, Eliodoro was always very close to them.

“Before, he used to leave work on the weekend and take me out for a snack. He did not have a family of his own because when he was young he got married, but at the age of 3 they killed his wife in an assault », commented the 25-year-old woman.

Eliodoro’s life has not been easy, the brother he lived with before he moved in with Loreley and Genesis mistreated him and did not get along very well with him. That is why the little girl’s mother decided that the best thing would be for him to go live with them.

Even recently, they wanted to swindle Eliodoro with a house since ” A man made him sign a document, they allegedly bartered ,” said Loreley, who added that fortunately the process did not proceed.

Currently, the old man lives comfortably in the house of Loreley and Genesis, who consider him as a father who always strives to give them all the support they need.