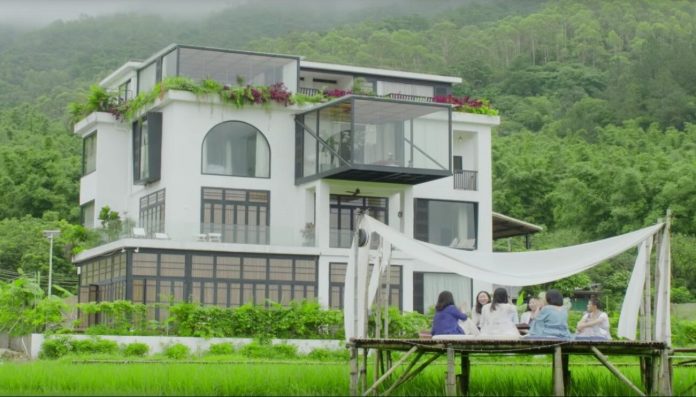 A group of friends in China moved in together to spend the best years of their lives in the company of the people they love the most.

It all started as a joke “What if we move in together? What if we retire sharing a house instead of going to a retirement home?” , but the plan came to fruition when the friends bought a property of 700 square meters.

At first the property was in a dilapidated state, the bricks could still be seen. But each of them contributed more than 80,000 dollars and they were able to build the home of their dreams, adding the money from all of them, they were able to improve the space and adapt the place to their comforts and tastes. It was a better result than if they had done it separately.

The girls first met as work colleagues and over time they became friends, now that they live together they call each other sisters.

For a decade, the friends saved money and searched for the ideal place, which they found in a small rural town, with a green and humid landscape due to the rice fields. With great effort they managed to retire before the age of 60 and now live in their small mansion.

The starting point was not easy. They were faced with a dilapidated property with a three-story building still in red brick. They were in charge of transforming it into an impressive white building full of light that comes through large panoramic windows. They have a large glazed terrace where they enjoy tea time and the incredible views around them.

The house has common areas on the ground floor, a gigantic kitchen and dining room and the best: individual rooms for each of them.

Each of them has their tasks already designated, from planting vegetables, cooking and even washing the dishes. Here they don’t need those blackboards that you had with your roommates to know who was doing what.

That yes, none of them hesitated to collect in an equitable way the 600,000 dollars that the remodeling cost, in the end, this was their dream place.

Although there are seven of them, they never argued or clashed during the project. Not even for the interior decoration. They did everything together.

In order to take advantage of the spaces, they built a swimming pool for hot days and their “Tea Pavilion” that is located in the middle of the meadow covered by tarpaulins, where they love to spend time together.

Now that they have fulfilled their dream, the friends made a new promise: Until the age of 60, each one must learn a skill so that coexistence in their old age is the best possible; sewing, gardening, cooking or learning to play an instrument are some of the options they have in mind.