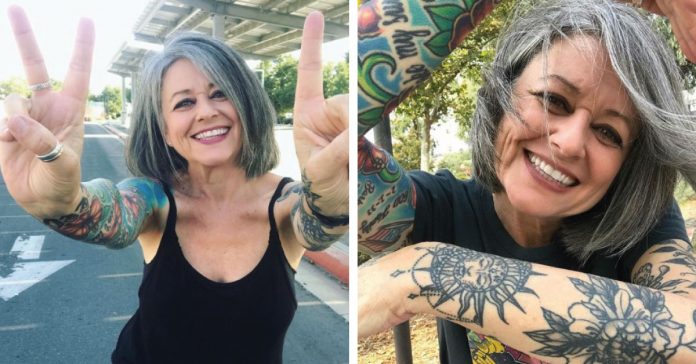 In social networks you can find all kinds of people with completely different stories that can reach thousands of people and thus become the example for many. The case of Lonni Pike has become known for being a woman who is capable of breaking the stereotypes of society.

At 58 years old, Lonni has tattoos all over her body and has also dared to dress in a youthful style. With a great presence on the networks, the woman is having a great impact by showing herself as she is and as she wants to be.

Her profile name basically says everything about her, or at least most importantly, @grayhairandtattoos (gray hair and tattoos) and Lonni continues to gain followers and messages of congratulations for going down that path.

“I just started my Instagram page this year. I get a lot of positive responses from people who appreciate the fact that I’m not afraid to show the world who I am,” she expressed in an interview with VivaFifty in 2020.

Her platinum-colored hair is already part of her identity and she doesn’t miss the opportunity to highlight it whenever she can.

“Tattoos have come with the story of my life. I got my first tattoo when I turned 30. I was in a bad marriage and we were separated for a while, “he told the media.

She has explained on several occasions that her style is summed up in overalls and Dr. Martens boots, in addition to emphasizing that she is more than her gray hair, her tattoos.

With incredible green eyes and a great personality, Lonni has been able to captivate her followers despite all the criticism she has received. Instead of paying attention to them, she decides to ignore them so as not to let negativity into her life.

“I don’t walk into a room and wonder what people will think, I walk into a comfortable room with every part of me. I do not give anyone the right to respond negatively to me in any area of ​​my life. My life is my universe and criticism is not allowed,” she shared.

Currently, the also single mother has more than 113 thousand followers on her Instagram account, while on her TikTok profile she accumulates more than 1 million.

Its content has to do with different looks and inspiring messages for the women and men who see it.