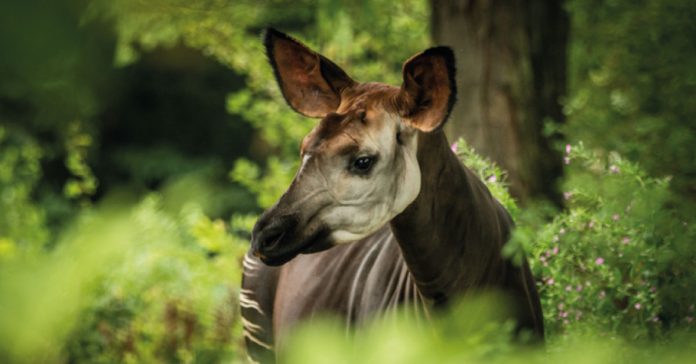 The African continent must be one of the richest places on earth in culture, landscapes, food, but especially in exotic species or completely unknown to the rest of the world. It is due to the lack of field research that it is difficult to know more about the flora and fauna of many regions.

Africa is well known for the great variety of wildlife, to put it in figures, there are more than a thousand different mammals, 2 thousand different birds and the presence of widely known animals such as lions, rhinoceroses or zebras.

For curious minds and animal lovers, we have compiled 5 species that you probably did not know.

Oryx or Arabian oryx are a species from the African continent. It is an artiodactyl mammal of the Bovidae family. It can be considered a type of antelope but it is in danger of extinction.

It is characterized by its long horns, which can measure up to two meters, there are four different types of Oryx in the world. To survive, this species developed the ability to obtain water from the plants it eats, as well as from the fog that appears in the desert during some parts of the year.

They are herbivores and are found in the most desert areas of Africa, such as the Sahel or the Kalahari. In the wild, they can live up to two decades. However, in protected areas they can extend their life up to ten more years.

They are very small birds and are generally diurnal, solitary, territorial and migratory species. Despite being almost always on the move, they inhabit various warm peninsulas throughout the year. Generally, they spend the winter seasons in South Africa and sometimes they come to some cities in Spain.

They can measure up to 50 centimeters in length, and are distinguished by their orange plume on their heads. The rest of the body is brownish pink, creamy white, and even brown.

Their official name is Madocua and they began to be called dikdik because of the sound they make when they are scared. They are mammals and they are also the smallest African antelopes that exist. They can be found in Somalia, Kenya and Tanzania.

They feed mainly on berries, leaves, shoots and fruits that they find in the bushes. Contrary to other species they do not need a lot of water to survive; They have an average life of 17 years. Unlike other animals, females are larger than males, and are distinguished by having a ring of white fur around the eye.

Female warthog with two of her young. Photo: Getty Images

The warthog or phacochoerus is a genus of artiodactyl mammals of the Suidae family, native to Africa. Because of their characteristic skin they began to be called warthogs.

It lives in the south of the Sahara and part of Senegal to South Africa. They are herbivores that feed on tubers. Unlike animals of the same gender, they do not build burrows, but make use of abandoned ones.

They are very calm and sociable animals, they enjoy living in large herds and prefer arid and humid savannahs. When they feel threatened, they react brutally. Particularly against their predators such as lions and leopards.

An adult okapi about to graze. Photo: Getty Images

The shape of their body resembles that of a giraffe and it is because they really are their closest living relative. The okapi looks like a mix of other African animals: giraffe neck, zebra stripes and horse body, with a characteristic blue tongue. It was first identified in 1901 and was originally misclassified as another species of giraffe. Later, they denied it.

To date no subspecies are known and it is the only species of its genus. You can find them in the Democratic Republic of the Congo, but it is difficult to see them because they are very good at hiding.

The world population estimates that there are less than 15 thousand copies. Within what the researchers have shared is that they are very solitary animals and only in the breeding season the male and female are together.