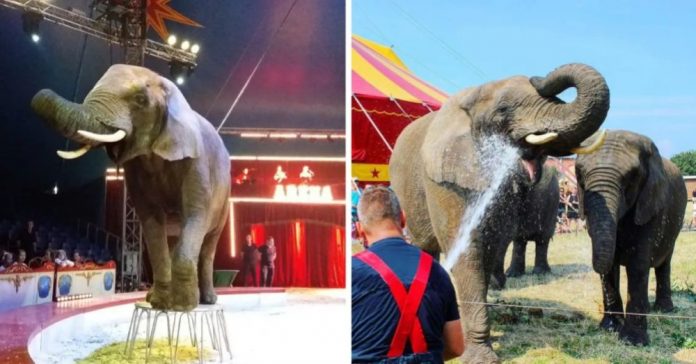 The four elephants, Ramboline, Lara, Djunga, and Jenny are lucky as they have got the chance to live out the rest of their days as retirees, thanks to the government of Denmark.

Denmark bought these four circus elephants to let them retire.

The Associated Press reports, that the country is spending 11 million kroner, the equivalent of $1.6 million, to buy the last four circus elephants in the country to retire them. The nation wants to ban the use of wild animals in circuses.

Officials told the outlet that the safety of Ramboline, Lara, Djunga, and Jenny will be ensured by the Animal Protection Denmark until a proper home is found.

Food and Fisheries Minister Mogens Jensen told AP that the ban on wild animals in circuses is expected later this year.

According to the ministry there were no immediate plans as to where to put Ramboline, Lara, Djunga, and Jenny, but applicants willing to take the mammals should offer a timely takeover and proper welfare. Animal Protection Denmark would ensure their welfare until then.

Circus Arena manager Benny Berdino said he was “sad to have to say goodbye” to its elephants, but was happy they would get good retirement. The fourth elephant belonged to Cirkus Trapez according to AP news.

Denmark’s Ministry Of Food And Fisheries Had A Decisive Plan For Those Wondering About The Well-Being Of Circus Elephants On Saturday.

The UK government passed a ban on wild animals being used for circus performances back in May and the purchase comes not long after that. Another circus in Germany became the first to use holographic animals in their show and made headlines back in June.

As New Jersey and Hawaii became the first states to issue legislation against the notoriously inhumane practice back in December, the US has also moved closer to banning the use of circus animals.

New Jersey and Hawaii’s trail-blazing measures ban the use of any wild animal species, including elephants, tigers, lions, bears, and primates, in circuses and traveling shows even if there is already legislation in 145 US localities that offer certain limitations and restrictions on animal performances.

They Used To Belong To These Companies.

According to what BBC reported, it was decided that baby African elephants would no longer be taken from the wild and sold to traveling circuses just a couple of months later.

Germany’s Circus Roncalli became the first to do away with live animals entirely in lieu of holograms in 2018. It just wants to reduce animal cruelty.

Circus Roncalli started phasing out animal performances as early as the 1990s, which was founded in 1976. The Rheinische Post reports that they exclusively use 360-degree holographic projections.

The holographic acts are like the audience would traditionally see, from performing elephants to galloping rings of horses.

This is just one example in order to ban using circus animals around the world.

Famous circus corporations Ringling Bros. and Barnum & Bailey shut down in 2017 after years of protest against them.

Citing a “mood shift” among customers, Ringling Bros. stopped using elephants in their performances in 2015. But they continued to suffer low ticket sales and shuttered two years later.

Canada has no national or provincial bans on circuses using exotic animals, even though some municipalities do reported Animal Justice.

The organization states that most of the bans come with exceptions, like dog and horse shows and races, and agricultural fairs like the Calgary Stampede.

People for the Ethical Treatment of Animals (PETA) have started an ongoing petition to shut down the annual stampede, especially after six horses died during chuckwagon racing this year alone.

Their petition, “Horses will continue to pay with their lives until this barbaric race is stopped.”

An Additional Step Was Announced By Food And Fisheries Minister Mogens Jensen To Ensure These Elephants Truly Are The Last To Ever Appear In Denmark Circuses.