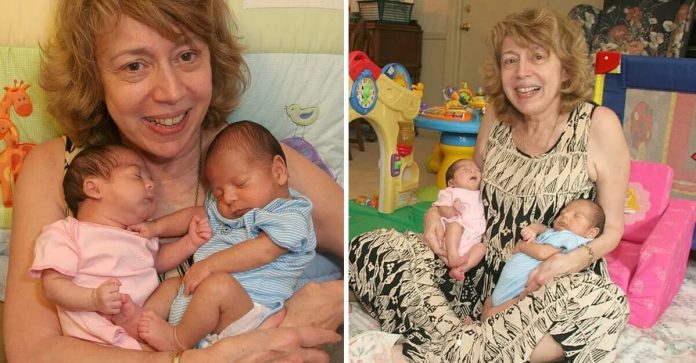 Lauren Cohen found love, got married and decided to have children at age 50. At 59 years old, she finally gave birth to a set of twins, but she did not imagine that this would be the end of her relationship with her 32-year-old daughter.

For love there is no age, it comes when we least expect it and in strange ways, it is a wonderful feeling that should not be missed. Sometimes, the relationship ends, you say goodbye to that person you loved, but it does not mean that the world is over, because later on there may be another person that destiny marked for you.

Lauren Cohen knows this sentiment all too well. She is a woman who, at 50 years old, in 2002, met the one who would be the love of her life. Once married she wanted to have children with him.

It is about Frank Garcia , a man 20 years younger than her whom she had seen in a dance class in New Jersey. After sharing a couple of dances, everything was inevitable. “I never thought that he would be interested in a much older woman. He was a great dancer so I asked him to dance one night and he said yes, ” she said of the moment.

The truth is that he wanted to be a father, and she did not want age to be an obstacle, so they began attending fertility clinics.

Many rejected them, but in 2004 a clinic in Virginia, United States, said yes and they began the extensive conception process.

It was thus that they managed to have their first daughter whom they named Raquel, but what they did not expect is that a year later Lauren would become pregnant again and now she is expecting twins. In 2006, at the age of 59, she gave birth to Gregory and Giselle, making her the oldest mother to carry and also the oldest to have twins.

So far so good, the couple was happy to start a family despite the difficulties. But what they did not imagine was that her daughter from her first marriage, who was 32 years old, would be upset with her mother.

Lauren’s daughter would be upset to such a degree that she cut off all contact with her mother and would also distance her from her granddaughter Hannah. Despite her actions, Lauren has no regrets about making her life with Frank.

These events were a great pain for her, since she does not feel that she has to miss out on the experience of having other children, on the contrary, she hoped to have a large and united family.

Because of her age, this mother has changed her lifestyle and now practices yoga and pilates, in addition, she is the mother of 3 young children, so she must stay strong. “I take 98 pills a week, a combination of medication and dietary supplements. I hope they last long enough,” she told Mirror UK .