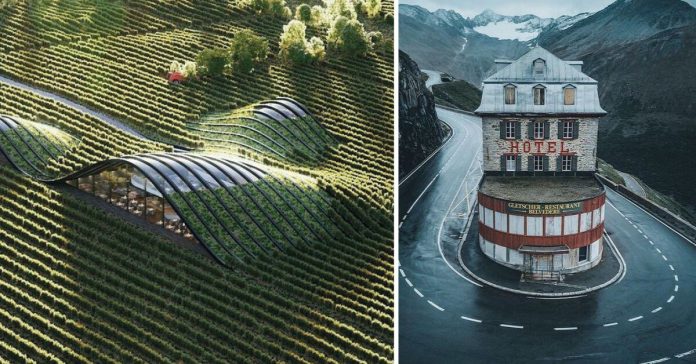 Talking about art implies talking about many disciplines, in addition to its complex subjectivity and its different forms of interpretation, art has accompanied us over the years in its various forms.

It is important to point out that architecture is considered an art, and therefore its creations have become worthy of being appreciated by everyone. From ancient times to modernity, architects have been in charge of providing us with the most fascinating buildings and constructions, although some opt for simplicity and elegance, others have given free rein to their imagination and have been creators of authentic architectural beauties. .

Below we show you a compilation of 20 works of architecture that are found around the planet and that you definitely have to see one day.

Its name means peace and tranquility, it is the oldest Buddhist temple in the city.

The tomb of Mahabat Maqbara in India.

It is an interesting fusion of Indian and Gothic architecture.

Yipianwachan Temple made of copper and located on Taimu Mountain, in Fujian, China

Designed by WOHA Architects in 2013. This famous hotel incorporates a concept with energy saving features in addition to the use of many gardens.

The Shilda winery in Kakheti, Georgia

Designed by X-architecture, it is the example of architecture that integrates nature. Dubbed ‘the greenest winery’, it is embedded in the landscape and is energy efficient.

The Fairmont Le Château Frontenac is a beautiful hotel in Canada

It is an urban historical complex declared a World Heritage Site by UNESCO.

This royal monastery was built during the late Ayutthaya period. It is influenced by typical Thai architecture and is also decorated with Chinese ceramics.

Craftsman’s house from the early 1900s, in Seattle

Brian Coleman, a Seattle psychiatrist with a love for old homes, discovered his passion for historic restoration and achieved this as a result.

It is currently one of the most famous pubs in the city: Mr Thomas’s Chop House

Terraces in Beirut, Lebanon. They were built in 2017 by Herzog and De Meuron

The building is a 119-meter-high skyscraper with several layers. It has a mixture of departments of different sizes.

Located in Lezhë, Mrizi i Zanave Agroturizëm offers restaurant and garden services, as well as family rooms and a children’s playground.

Proposal for a residential tower in Tel Aviv, Israel by the Penda group

Fallingwater in Pennsylvania, designed by Frank Lloyd Wright in the 1930s

The Kazan Ministry of Agriculture

Constructed by the Russian construction firm Antica, the building is a nod to previous Russian architecture. It is not a real tree, but it is made with wrought iron

Hotel Belvedere on the Furkapass, Switzerland

This climbing plant, called a wisteria, blooms around your driveway.

Designed by architect Zaha Hadid before her death in March 2016, the Leeza Soho skyscraper contains the world’s tallest atrium (194.15 meters) that rotates through the building as the tower rises.

What was the building that amazed you the most? Share your opinion with us in the comments.