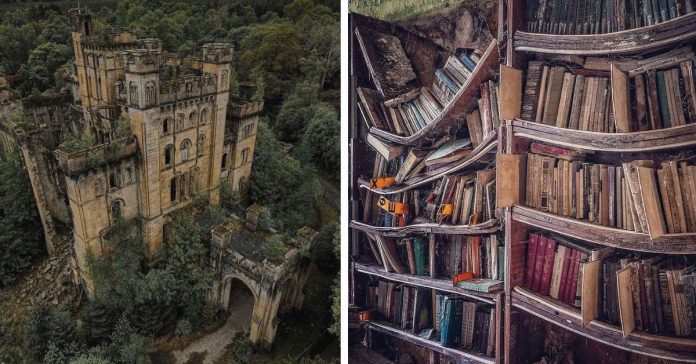 For some reason, these abandoned places often have a mystery that attracts us and invites us to visit them. Maybe it’s because a lot of horror stories happen on sites like this; usually the reason for abandonment is that something terrible and terrible happened in that space. Next, we want to show you some abandoned sites that will make you feel like you are in another world.

However, this is not always the case because many structures are neglected due to many conditions. Still, we felt uneasy when we saw them and thought of the thousands of stories that could have happened inside the walls. Being in an abandoned house makes us feel a little nostalgic and sad but also interested because the destruction of the place is always shocking.

2. The entrance to a magical world

3. These polar bears made their home in a Soviet weather station on Kolyuchin Island, Russia.

5. Somewhere in Portugal is this beautiful old mansion

6. The shelves of what was once a bookstore

7. A beautiful greenhouse which the plants have already taken possession of

8. This tree is 400 years old and is found in Muckross Abbey in Ireland

9. This house is perfect for a horror movie.

10. If you’re lucky, you might find this abandoned bookstore somewhere in Italy.

11. Nature took over the interior of this house in Karelia, Russia

13. Villa with a spectacular view of the sea

14. The castle of the Gargoyles in France

15. Railway that reached the end of the line

17. A castle room in Germany

19. The Castle of Sammezzano in Florence, Italy