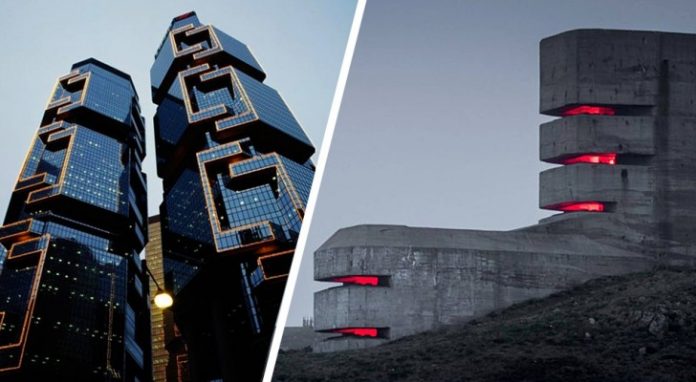 In any self-respecting adventure story, there is always a nasty antagonist. Whether he is human or not, whether he has superpowers or not, one thing is for sure: he is fearsome because he is hiding, planning sinister and evil deeds in mysterious and impenetrable places.

These are indeed recurring mechanisms in the stories, even if, in the reality that surrounds us, it is not impossible to find something real and tangible that transports us to these atmospheres. Ask the members of the Reddit group for Evil Buildings , a space where thousands of users share photos of the most disturbing and dystopian buildings that exist, the ones that would be perfect for making a movie and housing the villain. Skyscrapers without windows, dark and mysterious pyramids, “bewitched” buildings with strange reflections: there is something for everyone. Are you ready to discover these “evil” buildings?

#1. Don’t you get a little anxious just looking at it?

#2. Evil is locked in this building

It’s located in Kuwait, and whoever designed it certainly didn’t think of a pleasing aesthetic sense …

#3. An atmosphere worthy of a dystopian film

More than in the real world, this building seems like something out of science fiction, with its vapor, colors, lights and shadows.

Who is hiding in there? One might wonder when looking at this building!

Surrounded by buildings that are both terrifying and fascinating.

#6. It almost looks like these three buildings are coming, threatening.

#7. You walk out of the house and instead of a house like any other you find this.

Who knows who designed it and who lives there, but it certainly makes up for it with a beautiful, well-kept lawn!

#8. It’s hard not to be impressed by a vision like this.

Did this building come to life? He doesn’t sound very friendly, does he?

#9. A bridge and an atmosphere that certainly does not put us at ease.

With all this fog and gray, the last place we want to be is this bridge.

Impossible not to immediately think of a scene from a movie, looking at this skyscraper!

#11. Seen like this, the dark cathedral is not very reassuring, let’s face it!

She is located in Clermont-Ferrand, and looks perfect for this list despite her beauty!

It looks like it, but it actually exists. It is located in Rome, Italy, and is the headquarters of a bank.

#13. The skyscraper is watching you. And that is not reassuring.

#14. If you immediately thought of a James Bond movie, you are not alone!

In reality, it is just a fire station in the province of Bolzano, Italy.

A rather disturbing house, it could be populated by super-villains!

It is indeed a real building, located in Belgrade. With this fog, everything is definitely terrifying, isn’t it?

#18. Osaka’s mysterious Umeda Sky Tower, seen from below, can only fascinate and worry at the same time.

Have you ever seen buildings like this? Sometimes, in the right light and at the right angle, they look like the headquarters of a shady character, don’t you think?