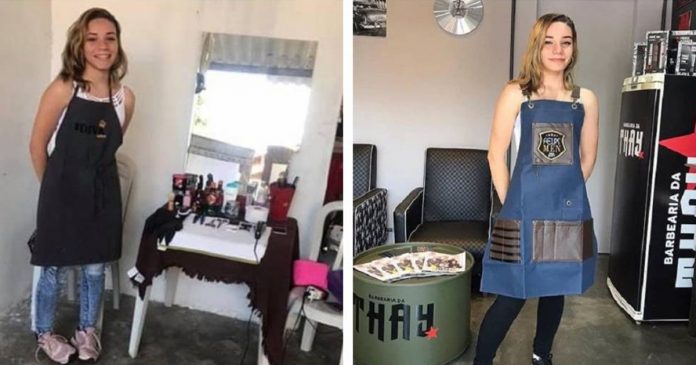 A story that inspires many for the talent of the young

Her name is Thayssa Caramez , and she lives in Brazil, she has a fervent passion for the world of beauty , in particular for haircuts.

When he was just 15 years old, he told his family about his interest in learning how to cut hair and becoming a professional artist. However , her lack of money and resources prevented her from going to a specialized school , this was not going to stop her.

After a few months, Thayssa decided to learn for her part through YouTube videos. Thanks to this, she learned basic knowledge to start developing more professional haircut techniques . She started practicing with friends and family to support her.

Through the months, the young woman was able to buy more tools despite her economic limitations thanks to the savings she had from her work as a stylist.

When she got what she thought was necessary, Thay’s mother decided to help her start a small business and started a stall in front of her house. She there she arranged all her necessary instruments for her to work with more people.

When he already had a constant flow of work, he was able to pay for some hairdressing courses where he specialized in eyebrow design, painting nails on hands and feet. Additionally, friends and family supported Thay by giving him more tools or giving him money so he could continue his business.

After all this effort, the icing on the cake was an appearance on a well-known YouTube channel in Brazil called “ hands that transform ”. When it came out on this channel, its popularity skyrocketed, so new customers did not stop arriving.

She is currently 17 years old and owns a beauty salon called “Barberia da Thay” in the Brazilian capital, Sao Paulo, where she continues to put a lot of effort and talent into her business.

Do not forget to share this note with your friends so that they can see that with a little effort and dedication, added to a lot of luck, it is possible to build something of your own.