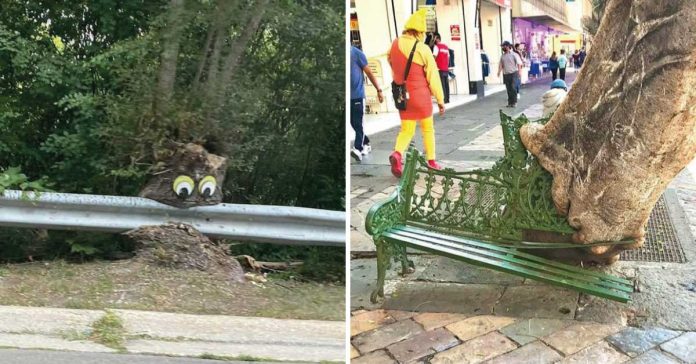 In general, we do not perceive trees as something dangerous. The most that worries people is that during a strong wind a branch will fall on their head or, God forbid, an entire trunk will fall. However, few people realize that these cute and at first glance harmless plants can be quite voracious predators. After all, one just has to be too close to some object, as the tree will swallow it without hesitation.

It is true that it usually takes at least a dozen years to digest such a dish, but these are already details that few people pay attention to. The main thing is the result. That is why in this article we made a perfect selection of some of the most risky trees, since they decided to eat a significant part of the town. I hope you enjoy it as much as we do.

1.The Victorian mailbox has lost its battle with this mighty tree and is now forced to become fodder for it.

2.It looks like it will soon be an all-wood sidewalk. Nobody has been able to stop the overflow of the tree.

3.The tree beat the fence, it was supposed to be a prison for him. A very symbolic image. They do not believe?

4.Not even a chain link fence helps stop this tree’s rampage.

5.Once upon a time, this wheel was used to pass a clothesline over it. Now that the tree has taken over it, it is no longer so easy to use, it would be best to find another option.

6.This streetlight is unlikely to be thrilled with his neighbor’s big hugs, we’re sure he’s out of breath.

8.Just a pair of eyes, which some attentive passerby must have glued on, turned this tree into a cheerful guy with a sign in his mouth that undoubtedly manages to brighten the day of all passersby.

9.Most likely, these teddy bear parts were attached to a tree to make it look like it was partially swallowed. But the picture is still pretty creepy.

10.Even if you’re a huge, heavy key, be prepared for the fact that a tree can turn you into a delicious lunch.

11.We can only hope that the owner of these glasses has managed to escape and is not now inside this huge tree.

13.It looks like this tree decided to learn how to use cutlery and started with a spoon.

14.Judging by the picture, one can only rejoice for the inhabitants of this area, because they definitely haven’t had a fire for a long time.

15.How many more years do you think it will take for this tree to swallow this fence whole?

16.Surely this wire is very tasty and crunchy because of that peculiar way in which the tree decided to eat it.

17.When you see another gluttonous tree on the streets of your city, don’t panic, just draw some eyes and the image will take on a new meaning.