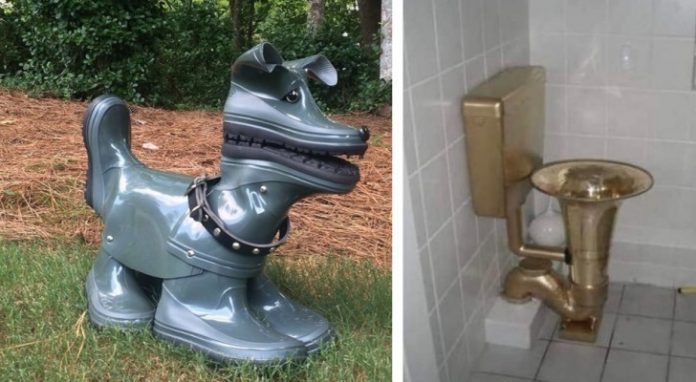 Many people are unable to project their imagination beyond objects, if they see a chair, for them it will always be a chair, with only one function. People with great creativity, on the other hand, set no limits. Their eyes see one thing, but their minds immediately start imagining all the possible and outrageous directions this product can take.

Here are 17 objects that show how some individuals can take something normal and totally transform it, sometimes even changing its function.

A choice that some European countries may not willingly accept, but this pizza topped with a “complete meal” has been achieved, going from the center to the edge, we go from starter to dessert. Are we sure fried calamari goes well with Oreos? There may not be good taste here, but certainly creativity.

Maybe the owner of this toilet plays in the marching band, in the brass section. He had one French horn left and decided to use it as a toilet.

They have designed really special bluetooth earphones, it looks like an octopus tentacle is coming out of the ears.

The owner of this cat gave him a bath. As he dried him off, seeing his damp fur take on the shape he wanted, he chose to turn him into a dinosaur.

He had some tattered jeans left over but he didn’t want to throw them away, so he thought he’d use them to cover his couch.

You never know when it’s time to take a nap, but more importantly, you never know how much chaos surrounds us when we want to sleep. For this reason, he found the solution to wear earplugs on him at all times.

A very interesting kitchen, certainly invented to save space. There is everything you need, stove, sink and refrigerator.

She had a lot of free time, she saw that the dog’s hair was very long so she decided to make a nice braid.

The front door of the bus broke, but the driver took care of it and replaced it with the one he had at home. It looks like the kitchen door.

Whoever did this wanted to create some confusion in the minds of the diners. This is a hamburger-shaped teapot. Does anyone who wants to use it have to ask for tea or a burger?

These slippers protect the feet from everything from the cold to loose objects. The edges of the furniture are prevented.

There is no right answer to this question. If we look closely, we see that there are both, the frame of a chair supports a glass coffee table.

A car enthusiast has decided never to part with his car, even when he goes to sleep. That’s why he decided to make a bed in the trunk of this truck.

A very original guitar. Playing it should be really fun, it looks like it was made on the foot cast of a mythological figure.

She needed to repaint her fingernails, but was tired of having them all the same color. She decided to make new decorations with a real banquet: from pasta to cakes, without forgetting vegetables.

16. The little dog in boots

It is a true work of art. He took boots and made a structure. It looks like a real little dog.

He didn’t like the golf cart, it was white and almost anonymous. So he decided to transform it and make it unique. He colored it and gave it the features of one of the protagonists of the animated film “Cars”, Martin.

Have you ever taken an ordinary object and transformed it into something else or simply embellished it? What ?