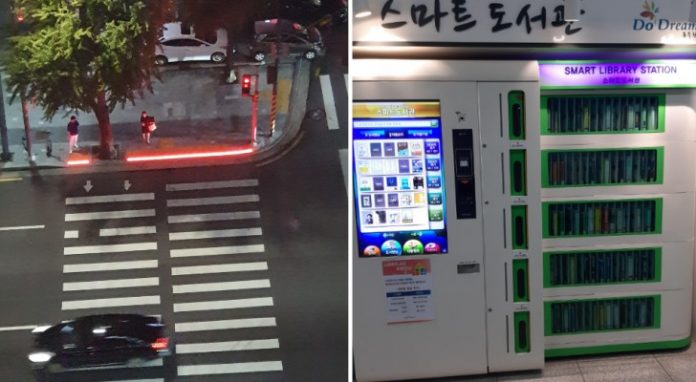 “A tea set I found at my grandmother’s house was made in North Korea.”

“Police cars in South Korea have sirens that can extend to display LED warnings in traffic”.

“In Korea, disposable water bottles don’t have a plastic wrap to allow for easy recycling.”

“In South Korea, we build stairs around trees.”

“There’s a bar in Korea that serves freshly made drinks in sealed aluminum cans.”

“An office in Korea has reading glasses for those who need them to fill out forms. They are labeled by age group for people in their 40s, 50s, or 60s.”

“A bus stop in Korea that sprays mist during the summer to cool people waiting.”

“I found this ‘veiled lady’ mushroom while hiking this morning near Seoul, South Korea.”

“A telephone pole in a busy rural area of ​​South Korea.”

“The Yellow Rose of Texas at Camp Casey, South Korea.”

“Pedestrian crossings in Korea have light bars on the ground to signal people.”

“This is an extraordinary designed public park in Gimpo, South Korea.”

“South Korea is installing traffic lights on the ground so people looking at their phones can still see the light.”

“The train station I stopped at in South Korea had a book vending machine. I thought it was really good.”

Have you ever been to Korea or would you like to go there?