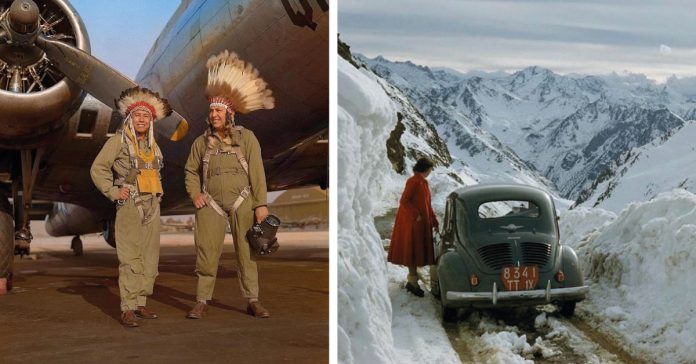 There is still no such thing as a time machine to be able to travel to the past and be able to meet historical figures or arrive at key moments, however, photographs are perfect aids to be able to remember what may not be possible.

Thanks to cameras it is possible to capture people, animals, landscapes or moments that we would like to revisit from time to time in our memories. That is why it is so important to save the photos, because little by little they build a personal and collective history.

The following images are a little walk through the past, probably your parents, grandparents or great-grandparents had to see, witness or hear about it, but not you, you are living another time.

Don’t forget to take lots of pictures for future generations to see how we lived at the beginning of the 21st century.

1.This is how a child reacts when watching television for the first time, 1948

2.When patients were quarantined at Ullevål Hospital they had to visit them, Oslo, 1905.

3.British airship R33 in a hangar during preparation for its maiden flight. Barlow Aerodrome, Yorkshire, 1919

4.A South Korean police officer measures the length of a woman’s skirt, 1970s

The photo was taken at a time of nationwide crackdown on men with long hair and women with short skirts in South Korea. That’s why they had those control measures.

Howard is one of America’s historically black colleges and universities, graduating more black doctorates than any other university in the United States.

Even if you think it impossible, that’s how they distributed food in the last century.

9.A woman in the middle of a snowy mountain in the Pyrenees, France, 1956

12.A Native American looks at the newly built transcontinental railroad in Nevada, 1869

14.This is how some young women reacted when they saw The Beatles, Plymouth, 1963

17.Geologist Thomas Griffith Taylor and meteorologist Charles Wright at the entrance to the ice cave, 1911