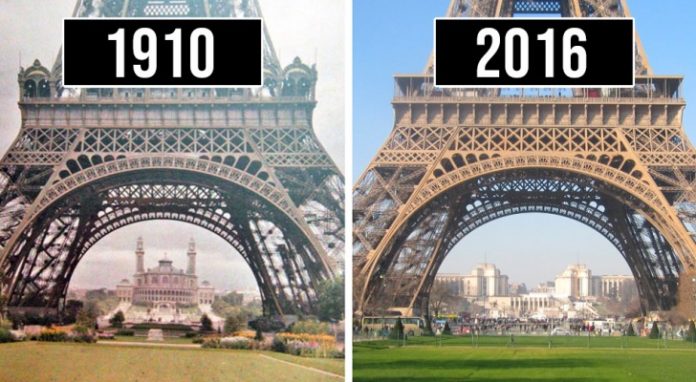 Do you like “before and after” photos of a historical or natural event? Then you are probably interested in “re-photography”, a branch of photography that deals with the search for old and new material to compare people but especially places that have changed radically over time and periods. historical. Spectacular images which, placed in confrontation, always leave us speechless and remind us that time passes for everything, sometimes for the best, sometimes for the worst!

In the city of Paris, a view along the Seine in 1900 during the Universal Exhibition, in 2017 the Eiffel Tower remains imperturbable in the distance

The Chaney Glacier in the United States: the difference between 1911 and 2005

116 years of difference for one of the symbols of the French capital: the famous Moulin Rouge!

106 years old and still there, on the roofs of one of the most visited cities in the world: it’s the Eiffel Tower!

The ruins of World War II on a city street in Poznan, Poland. Now it’s a modern, clean street

Almost a century has passed, but this beautiful French church has been completely renovated and has retained its original form.

The city has changed so much over the centuries, but one thing remains certain in Paris: Notre Dame Cathedral stands on the Ile de la Cité, along the Seine.

How the Shepard Glacier has changed over the decades: It’s slowly disappearing…

When, in times of war, the parterre of Notre Dame was used as a parking lot for tanks ready to defend the city

The Svartisen glacier in Norway also seems to be gradually disappearing…

Even malls can change appearance quickly: this is the case of St. Stephen’s Mall in Ireland

The Golden Gate Bridge in San Francisco: even if time passes, its charm remains unchanged

A beautiful return to the past and a beautiful photographic reflection on the present, isn’t it?

They Discover In Pompeii An Almost Intact Room; It Is The Best Preserved Roman City

18 Photographs That You Will Not Understand At First Sight.