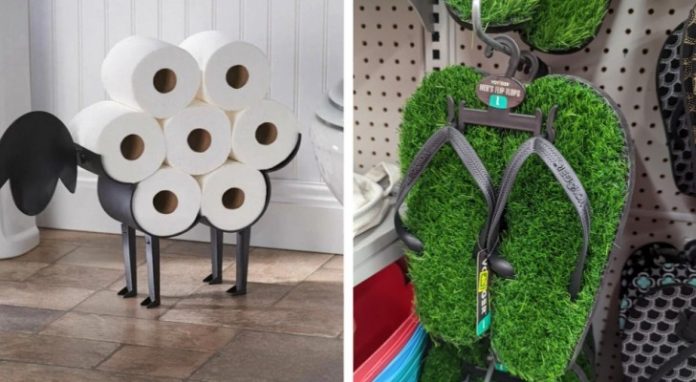 It often happens that one walks into a store or even just down the street and marvels at a certain object. At this precise moment, the mind begins to fantasize and ask many questions, the most common of which are “what’s the point?”, “how did it come to their minds?” or “what were they thinking when they invented it?”. In short, we often come across creations so strange that we wonder how they could have invented it.

Here is a list of 16 really unusual objects that various people have come across.

On the mirror of the Tallinn airport toilet, all the steps to tie a perfect tie have been drawn.

Undoubtedly a slightly odd container, and probably also difficult to collect the last remains of jam at the bottom. But after everything is finished, it can be used as a drink.

It’s not every day that you walk into the restroom and find a huge amount of toilet paper holders on a single wall.

Every child’s dream is to wear diapers with “Pokemon” printed on them. In this case, the drawing represents Pikachu.

These headphones are really weird, they have the shape of an octopus tentacle. Once worn, they leave all observers perplexed.

This mug has a handle that doubles as a coaster. This avoids saucers and coasters. It’s not every day that you see such an object.

This is the typical object that can be found in a dentist’s waiting room. A pretty tooth-shaped clock that lets you know where you are right away.

Just wearing these flip flops always feels like walking on a meadow. It’s probably very relaxing and you feel in touch with nature.

An object that you naturally cannot do without, a skateboard and spiked shoes to do many acrobatics.

When it rains, shoes are most likely to get wet. Plastic overshoes are therefore the perfect gadget for those who want to keep their feet dry.

We can no longer do without our smartphone. Even when it’s raining, if we have to send a message, we do it, but in these cases, to prevent the raindrops from getting on the screen, we invented the mobile umbrella.

In extreme cases… When you have to go to the toilet, but there is nothing around. An original object, but certainly useful.

Everyone should have sushi shaped toys in their house. Too bad they are not edible.

A very unusual toilet paper holder. In order not to distort the creation, some people would probably give up using it.

Forget the gloves, so you can recreate a real Minotaur with your hand and keep your fingers warm at the same time.

What’s the point of a cell phone cover with a nose? Maybe it’s useful when you’re bored.

Have you ever seen any of these things?

16 Objects That Fit Perfectly By Chance

17 Images That Overwhelm Us With A Unique Feeling Of Harmony